The new plethora of smart phones that are taking over our lives mostly boost a button-less interface. They often boast a touch screen keyboard, which depending on how fat-fingered you are, may or may not be functional for you. There are phones out there that have a keyboard packed into them, like most Blackberries, certain Window’s based phones, or Android based phones. They all come with a couple of potential problems, either the screen is too small, or the phone is too bulky, and sometimes a bit of both.

Solution? Mini Bluetooth keyboards! These are like normal keyboards, but smaller, interface with your device using Bluetooth, normally rechargeable. They can easily slide into your trouser pocket, and can be carried around in a bag for those who have to write that important email when they are out of office, and don’t have access to their laptops.

While there is quite a range out there, I tried the following one from MobileFun(www.mobilefun.co.uk), home for phone accessories of all sorts.

The device comes with a CD that contains a manual, applications for different operating systems, and instructions for them.

I tried the provided application on my Android phone, and while it installed properly, it needed to be activated online and no matter how many times I tried, it did not work.

So I tried to pair it via normal methods, and lo and behold, it just paired straight away. There was actually no need to install the application. I really should have tried that.

Tried the same with my Windows laptop, and paired straight away as well. However, I paired it back again with my phone as that was where I was going to use it.

The keyboard has a real good build quality. No CHEAP feel to it, which is something you almost always expect when you buy non-branded accessories.

The keyboard on the Android system works essentially the same as the touch keyboard. You press SHIFT and then press a letter to capitalize it, instead of pressing them together. Click SHIFT twice and you get CAPS LOCK. 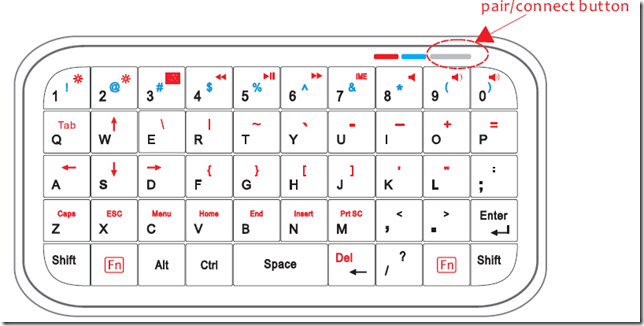 All the buttons have a good tactile feel. However, they do require pressing a bit hard. A softer feel would have helped. Essentially what that means is that touch typing is not very easy.

Another problem I have is the layout. The layout is as crammed as possible, and the letters are all left aligned instead of the standard layout where they are skewed. As a result, on the last line, ZXCVBNM, I keep pressing the key to the right of the one I want to press. I am sure this can be overcome by practise.

Another problem is that the Backspace key is next to the Space key. Similarly, another thing that requires a bit of practice.

However, because of that, it does pack in a lot more keys than most touch screen keyboards offer. Most keyboards will not have arrow keys, and I have found that scrolling through text, specially when writing a long email that goes beyond the span of a single page is a big problem. This keyboard allows one to do that with no fuss!

The one thing that has stood out so far is the battery life. I received this about two weeks ago, and I have only given it one charge. While I have not used this extensively, I have used it a fair bit, given it a good run, and so far,  I have not had to recharge it once.

Since I am very comfortable with using my SWYPE keyboard on my Android (Samsung Galaxy S), I won’t be replacing my regular keyboard usage with this. However, this will definitely accompany me on business or holiday trips,  where I may have to sit down and answer emails without me having access to a computer. Since it charges off the same port (Micro-USB) as my phone, and has an immense battery life, I don’t need to worry about power issues either.