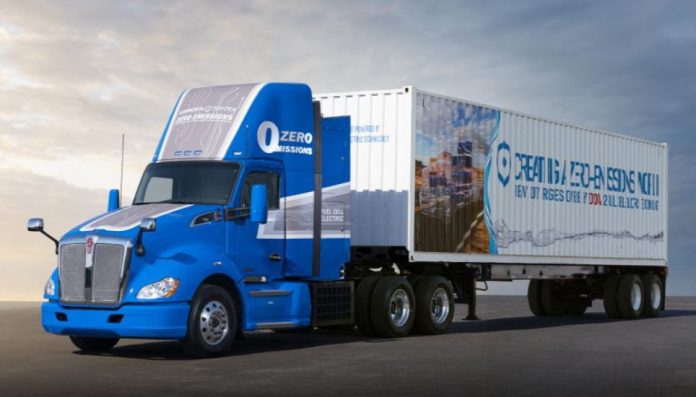 As the automobile industry increasingly moves towards going electric, Toyota has moved closer to Zero-Emission Heavy-duty Fuel Cell Electric Truck Production. The world-renowned auto manufacturer has incorporated its next-generation fuel cell electric technology in a new fleet of heavy-duty trucks. The pre-production prototypes use the same fuel cell system as the forthcoming new Toyota Mirai saloon and are being prepared for testing on short-distance freight haulage (drayage) routes in the Ports of Los Angeles and Long Beach in California.

What’s new with the next-generation fuel system is the flexible design that allows it to be used by different truck manufacturers. For the test prototypes, it has been adapted for a Kenworth T680 chassis. A compact hydrogen storage cabinet behind the cab houses six hydrogen tanks with the same capacity as previous prototypes, while a new lithium-ion battery ensures a smooth power flow to the electric motors. In this configuration, the second-generation fuel cell system gives the truck a driving range of more than 300 miles with a full load of 36.3 tonnes, with excellent drivability, quiet running and zero harmful emissions.

“This is an important step in the transition to emissions-free heavy-duty trucks,” said Andrew Lund, Chief Engineer, Toyota North America Research and Development. “Our first prototype trucks proved that a fuel cell electric powertrain was capable of hauling heavy cargo on a daily basis. These new prototypes not only use production-intent hardware, they will also allow us to start looking beyond drayage into broader applications of this proven technology.”

Toyota understands the increasing need to reduce airborne pollution in the Ports of Los Angeles and Long Beach. The introduction of the new fuel system has been in response to this increasing need. Toyota’s Environmental Challenge 2050 aims for the near elimination of CO2 emissions from the company’s vehicles, operations and supply chain by 2050. This is another incredible step taken to achieve the goal.