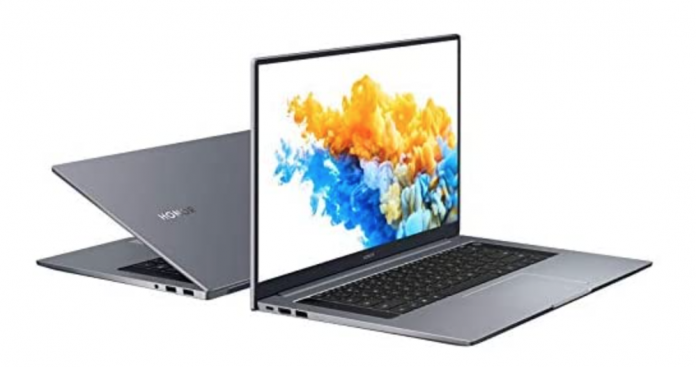 At only £850 (at launch), the Honor MagicBook Pro packs in quite a punch. It runs cool, has the power to do loads, and offers a brilliant screen. Having said that, details such as the pop-up camera could be better. Regardless, it offers you great value for money, something that is the hallmark of the Honor brand. Having already won awards at launch at IFA 2020, this is definitely one to watch.

While it has a fair few competitors in the Windows Laptop world, including the Dell XPS series, it is quite clear by its sheer looks that it is having a go at the MacBook Pro. In fact, the 6 core processor is a feature of the latest MacBook Pro, though the AMD Ryzen in this one promises better speed and performance!

At 1.7kg, this isn’t exactly light weight, but the thin profile gives it a rather slick look. It slides in and out of your bag quite nicely. The (space) grey finish and the speakers on either side of the keyboard shout out its intentions quite loudly.

With a 16.1 inch screen, it sits fairly close to the 15″ laptop market, but with an interestingly wide screen ratio. Having said that, the wide size leaves you wishing for a NumPad!

Hidden in there is also a pop-up camera, which is decent but gives you that funny angle that just hasn’t taken on yet. Interestingly, there is also a ‘drain-hole’ at the bottom side below the camera, which is to allow any liquid ingress in this area to be dealt with. Reader, I wasn’t brave enough to try this out, and I wouldn’t suggest you do this either.

On its sides, you will notice a USB C which does both charging and data transfer, 3 USB 3 ports, one HDMI port and a 3.5mm socket.

Apart from the drain-hole at the bottom, you will notice a bunch of vents all along, which is where the cooling takes place. While the device runs quite cool, the placement of these does mean that when it is chugging away, you wouldn’t want this to be sat on your lap.

The keys on the keyboard are pretty low, and do not have much movement to them. This takes a little getting used to, depending on what your previous hardware was, but all in all, it isn’t a problem. The keys themselves are spread out properly, so you don’t feel too congested. As I said before, the wide profile of the laptop could have encouraged a Numerical Keypad in there, but for now we wait.

This is a funny one. While we are seeing more and more devices with this, it just isn’t taking on.

Do you really want to be able to see my fingers while chatting with me on a video call? Probably not.

It also means that if you are having one of those meetings, it will show off straight away if you were typing away while nodding along.

This is where this device really shines. The processor, the RAM and the SSD all work together to give you a pretty decent performance. While my day to day work is mostly around what will be called ‘office work’, I do get involved in using various engineering software. The device worked well as and when it was used, and for most part, it ran pretty cool.

It was only when heavy duty software were used that we heard the fans go. At that point, this wouldn’t be very comfy on your lap, but generally speaking, this is a pretty slick and fast machine, that will tick most of your boxes.

It is also impressive how cool it generally runs.

The battery life averaged between 7-8 hours for me on normal usage, though I am sure it will vary for person to person and their usage.

The included charger does offer fast charging, and the device gets to 100% pretty quickly.

In a refreshing take on laptops, this one doesn’t come loaded with loads of software that you don’t want to touch. However, included on the device is the PC Manager, which provides handy statistics on how hard your PC is running. What I found quite useful was how it keeps an eye on all the drivers, and lets you update them from that one place. This applied to everything from Wifi drivers all the way to Bios.

PS, while I was using this, I did get updates to Wifi and display drivers, so it is a handy thing to have.

One of the highlight features of the device is the Multi-Screen collaboration. It is the dream that a lot of Windows based devices have been trying to achieve, based on the cloud syncing you get between iPhones and MacBooks/Macs.

While I haven’t been able to try it myself as I didn’t have a compatible phone with me, the videos and reviews I saw of it seemed like it works quite well.

The laptop really stands out if you want to watch a movie or use it for media. The speakers on both side give you a really good and immersive sound, and the screen is really quite good to watch films on.

It also means that this can be used to do good multimedia editing and processing, especially with all the power it packs!

You can buy it direct from there, or look at other options such as Amazon.

At the time of writing, this retails at around £850, which makes it a pretty decent deal. If you buy it directly from the Honor website, there is currently a deal which bundles in a free item of your choice.

While a few weeks is never enough to really know a laptop well, I have to say that I am really impressed with this. Windows laptops have a new champion, and it costs only £850! The value for money alone is a great plus for this device.