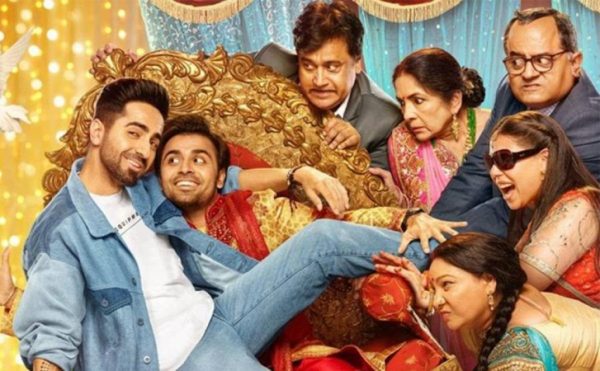 Shubh Mangal Zyada Saadhvan released yesterday. Although I have always missed the vibe of Dubai cinemas every time I go to watch a Bollywood film, this time I somewhat thanked my lucky stars for not being in the Middle East since it was banned there. This reminds me of the days when Ae Dil Hai Mushkil was banned in Pakistan and some Bollywood enthusiasts travelled to Dubai to watch it. As they say, everything happens for a reason, I would like to thank the Universe for conspiring to send me here to Australia.

Keeping the tradition alive, it was the first day third show for me. Well, because only the third show timings suit my schedule. While the queue for tagging their tickets was long this time, I wondered if all the Australians were eager to watch Shubh Mangal Zyada Saavdhan. Entering my respective hall made me realize that it was otherwise. There were hardly any people in the cinema. Luckily, it started filling in after some time. Even if it was not jam-packed, by the time the film started it was a decent count according to a typical Australian city’s standards.

The Adventure Begins on a Train Trip

As the Shubh Mangal Zyada Saavdhan starts, you find two sales representatives trying all the available techniques to sell the toothpaste they work for. They are Ayushman Khurrana (Kartik Singh) and Aman (Jitendra Kumar). Kartik is an abandoned child while Aman has a big close-knit family. The two join Aman’s family on a train trip to her cousin Goggle’s wedding and this is where the adventure begins. While travelling, Aman’s father Shankar Tripathi (Gajraj Rao)who happens to be a failed scientist discovers that his son and his friend are actually gays and in love with each other.

Aman’s parents cannot handle him coming out about his sexuality

Coming from a small town like Allahabad, Shankar Tripathi finds it hard to find peace with his son’s sexual orientation and this is how the story begins. Neena Gupta playing the character of Aman’s mother has also left no stone unturned to keep it as real as possible. The Badhai Ho couple has come together to create their magic yet again.

The performances  of all the actors are immaculate and straightforward

All actors have probably delivered the best performances of their career so far. It is interesting how Jitendra Kumar (Aman) has taken the centre stage from Kartik (Ayushman Khurrana) through his convincing and understated acting. By the dint of an intelligent screenplay, crafty direction, and heartfelt performances, Shubh Mangal Zyada Saavdhan has the ability to transport you to its world and make you believe that you are a part of it.

Ayushman Khurrana certainly deserves all the praise for being the first mainstream actor to brave up for a homosexual character.

The cinematic genius of Shubh Mangal Zyada Saacdhan’s makes is evident in every shot and frame of this film. Homosexuality is considered a taboo in most part of the worlds. While India is now coming to terms with it on the legal grounds, it is still not welcomed in many parts of the country. The writer Hitesh Kewalya has dealt with the complexities of a sensitive topic in an intelligent way making you believe in the power of love and the right for everyone to live their lives the way they want. It is a rollercoaster of emotions with laughter taking over everything else.

Unlike most of the films depicting the homosexuals in the past, Shubh Mangal Zyada Saavdhan has not stereotyped homosexuals, giving a realistic picture of how blended they are and avoiding any caricatured characters. The story revolves around them and they are not simply the sidekick like in most of the films.

It is not all about homosexuality in it

Apart from homophobia, the film has also dealt with many other vices prevalent in the desi societies e.g. forced marriages, unfulfilled lives, joint family systems, lives of everyone in a joint family governed by the patriarch of the family, dowry, and the pressure to get married among a few others.

Loaded with comedy and realism, Shubh Mangal Zyada Saavdhan gives you all you are seeking for when you go to the cinema on a weekend night. Every department in the film has done a great job although the music might take some time to grow on you. But overall, this film is a complete package and you must watch it to shed off any mist from your mind. 8/10 from my side!