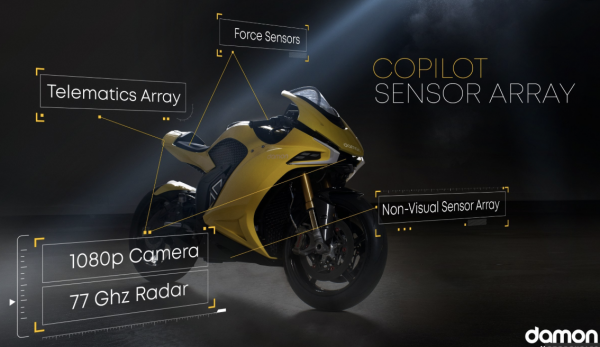 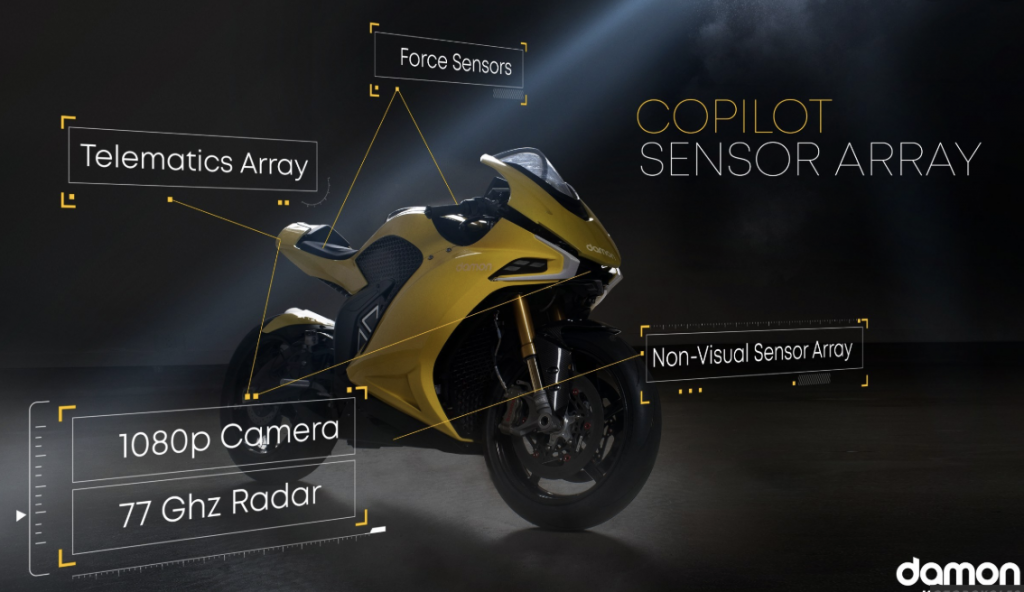 Ahead of CES 2020, Damon Motorcycles and BlackBerry QNX have now announced plans to collaboratively unveil Damon’s flagship Hypersport Pro Electric Superbike at the event on January 7th. The joint unveiling is part of a broader announcement that Damon Motorcycles will be using BlackBerry QNX to power its CoPilot advanced warning system across its entire line-up.

CoPilot delivers forward-collision warnings through haptic vibrations on the vehicle’s grips. Blindspot alerts are also provided with amber LED lights to the left and right edges of the windscreen. Riders are alerted to rear collision threats via bright white LED light on the windscreen’s edge, Giraud said

At CES 2020, Damon Motorcycles will reveal two versions of the superbike: The Hypersport Premier and the Hypersport HS. The Premier bike is a limited edition, with only 25 bikes of that kind being produced. Each bike will have one-of-a-kind paint jobs, single-sided carbon fiber swing arms, and upgraded brakes and suspension.

“We’re on a mission to unleash the full potential of personal mobility for the world’s commuters,” said Jay Giraud, Chief Executive Officer of Damon Motorcycles. “To address this, we spent the last three years developing an AI-powered, fully connected, e-motorcycle platform that incorporates CoPilot, our proprietary 360º warning system. By building it on BlackBerry’s best-in-class technology that is safety certified, Damon motorcycles will be the safest, most advanced electric motorcycle in the market.”

The Hypersport HS will be the mainstream version of the bike, with a regular swing arm and regular paint, Giraud added, but both versions of the Hypersport Pro will have CoPilot and Shift capabilities. The performance specs of the Hypersport bikes will be released at CES 2020, and prototypes will hit the roads in mid-2020, according to the release.

“With its advanced collision warning system, Damon’s new Hypersport Pro is a game-changing model for the motorcycle industry,” said Grant Courville, VP, Product Management and Strategy, BlackBerry QNX. “We’re absolutely thrilled to have them in our booth and look forward to showing off the highly-secure software that delivers enhanced situational awareness and increased peace of mind for riders. BlackBerry QNX is leading the way in next-generation mobility systems by providing a safe and secure platform for connected vehicles and beyond and we’re proud to work with Damon on this exciting advancement.”

With BlackBerry’s system, all of the processing and the real-time computation, decision making, and self-healing function to reboot instantly in the event of any kind of computational error. The system works flawlessly and invisibly to the rider, so all they have to do is interpret that LED light or that feeling in the handlebars and they can make a very fast, intuitive, evasive decision if necessary.

With performance specs to be released at CES 2020, Damon’s industry-leading advanced prototypes are set to hit the roads in mid-2020 to the world’s largest mobility segment well overdue for a safer, smarter, zero-emission solution.