Cristiano Ronaldo still has an iPod Shuffle? In praise of the dead gadget 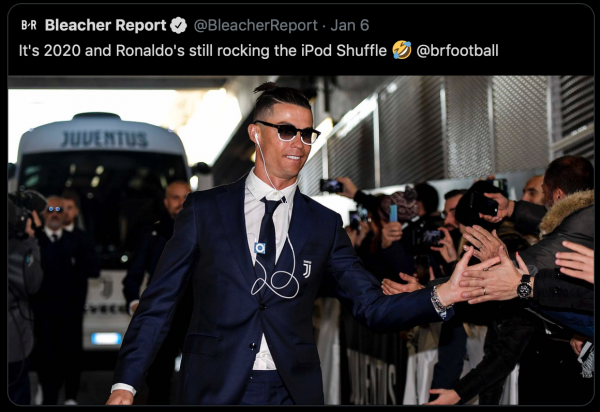 Cristiano Ronaldo has an estimated net worth of £350 million, making him one of the richest athletes in the world. So when a new picture of the footballer popped up on social media, showing him wearing an iPod Shuffle, a device that Apple killed off nearly three years ago, there was plenty of surprise and derision. Why was a multimillionaire wearing an old MP3 player, which cost as little as £32 when it was discontinued?

But that wasn’t my first thought. Instead, I started thinking about the value of devices that do one thing well and of technology that just quietly keeps on going. That was one of the best things about the iPod Shuffle — it was an unobtrusive little device dedicate simply to playing music. It’s size and convenience is likely the reason that Ronaldo has hung on to his.

The endless upgrade cycle of the smartphone-era means that the idea of holding on to an apparently obsolete bit of technology does seem laughable to a lot of people. For something to be worthy of our time, it either needs to be the newest possible thing or something old enough to have accrued retro charm — an analogue SLR, a typewriter, or maybe a MegaDrive, played in a nostalgic reverie for a 16-bit childhood . The iPod Shuffle, so recently put to the sword by Apple, falls between those two extremes.

But it’s just as possible for an iPod Shuffle to be an object of nostalgia, a time capsule of music. Like the iPod hoarding main character in Edgar Wright’s Baby Driver, Ronaldo could have kept hold of his Shuffle for sentimental reasons. Perhaps there are playlists held within it that are fundamental to his preparation before games or tracks that have yet to migrate onto the vast but incomplete libraries of Spotify and Apple Music.

I think we should encourage and admire a desire to keep and reuse technology for as long as its components will last. While Apple has long since abandoned the Shuffle, there’s no reason Ronaldo should. Just because you can easily afford newer and more complicated solutions, doesn’t mean a cheaper and older one is suddenly redundant.

In a world of smartphones that need to be coddled in cases and smart watches that insistently prod you with notifications and chide you for not hitting your goals, the dumb simplicity of the iPod Shuffle is a beautiful thing. It was cheap and durable, singularly-focused and simple to use. There should always be space in the world of technology for devices like that and it would be good if there were more of them.

I like to dream of a future where there is more technology that does one thing beautifully but that goes beyond what the iPod Shuffle represented. I want devices that are more easily recycled but also simple to fix and upgrade. Ronaldo holding on to his iPod Shuffle can be interpreted in lots of ways, but let’s consider it an example of someone not simply tossing old tech away. It’s a lesson we could all do with heeding, no matter the state of our bank balances.