A foldable Tablet by Intel! 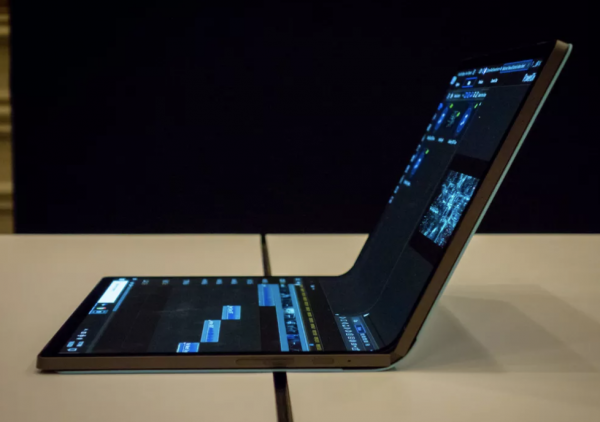 The foldable device market is already starting to look a little crowded, thanks to recent and upcoming offerings from Samsung, Huawei, and Lenovo. However, most of these products are on the smaller side, usually taking the form of folding tablets or smartphones. At CES, though, Intel has proven that bigger might just be better.

At the event, Intel revealed its latest folding device prototype, dubbed the Horseshoe Bend. Unlike many other folding-screen device concepts (or actual products) we’ve seen so far, the Bend is absolutely massive, coming in at 17 inches while lying flat.

That’s bigger than even Lenovo’s ambitious ThinkPad X1 Fold, which offers about eight inches of screen space. Of course, the key difference between the Bend and the X1 Fold is that the latter will be an actual product, and the former is only intended to show off what Intel is capable of. It will probably never arrive in stores, at least not in this form.

Design-wise, the Bend is nothing special at the moment. It’s thick and bulky, which is to be expected from a proof-of-concept device. When folded in half, the device takes on the shape of a small 12-inch laptop or netbook. When it’s configured like this, you can opt to use a wireless keyboard, a digital keyboard, or even slap a magnetic keyboard onto the bottom half of the screen.

It will cover the screen entirely, and let you use the Bend just like you would a normal laptop. When unfolded, the Bend becomes a massive tablet. You can either use the device as is or prop it up using its built-in kickstand.

Compared to Lenovo’s just-announced ThinkPad X1 Fold, the Horseshoe Bend prototype actually feels slightly more luxurious thanks to the exposed matte metallic finish on its edges. Intel’s concept has a similar articulating hinge to the ThinkPad, as well as a leather cover, making it feel almost like a textbook. It has a thinner profile and slimmer bezels but was heavier than Lenovo’s PC. Intel also integrated a kickstand that props the tablet up so you can use it like an all-in-one, something the ThinkPad X1 Fold also offers.

Like many other folding devices in the works right now, the Bend wants to offer you a computing solution for just about every use case. Are you on a plane, where space is limited? Fold the device in half, attach a magnetic or wireless keyboard and start typing away. If you’re relaxing at home, full-screen usage might be more appropriate, and so on.

Aside from basic design features and the Bend’s impressive size, Intel hasn’t revealed too much about it. It is purely a proof-of-concept at the moment, intended to show the world that bigger foldable devices are not only possible but functional and even desirable.