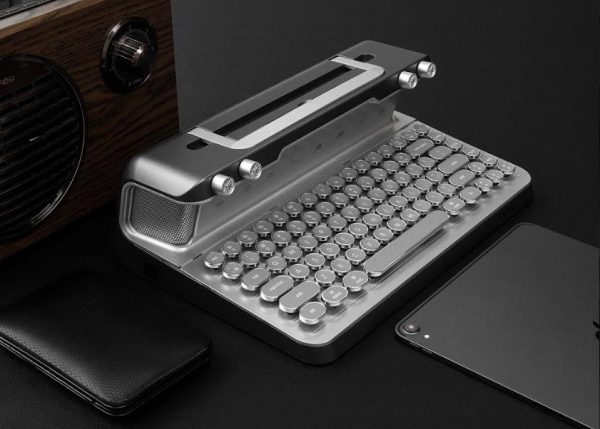 KnewKey, one of the leading keyboard manufacturer has announced its latest addition to the keyboard world. The all-new mechanical keyboard Rocksete is set to release on Indiegogo on the 5th of November 2019. Rocksete is a crossover project between KnewKey and HARMAN who are always keen on bringing innovative products to the market. This is also the world’s first-ever mechanical keyboards audio crossover.

According to KnewKey’s website product listing for the Rocksete keyboard, the Bluetooth speakers are JBL speakers and KnewKey claims that the speakers will offer “360° surround with the fully immersive cinematic audio experience.” KnewKey’s press release announcing the Rocksete also mentioned that the keyboard’s audio system includes a Harman 45mm full-range unit and four bass radiators. The audio output has been tuned and optimized by the Harman Kardon audio engineer team, it is recognized by Golden Ears, with its revolutionary bionic engineering breakthroughs, regardless of where you are, and it delivers superb 360-degree surround with the fully immersive cinematic audio experience.

In addition to Bluetooth speakers, the Rocksete retro mechanical keyboard is also expected to feature a choice between brown/red switches or blue switches, support for up to 3 devices simultaneously (via either Bluetooth or wired connections), a built-in stand for your devices, and LED lighting effects that KnewKey claims is “driven by music.”

Take Care of Your Fingertips

The Rocksete features everything you like from tactile and responsive keys, high-performance speakers, premium build quality, perfected details and so much more! Inspired by the typewriter, under the retro look is the most desired mechanical switches, offering you a tactile feeling plus comfortable typing even for long hours. The standard configuration comes with red and blue switches to offer you the best typing experience.

KnewKey is taking massive inspiration from both typewriters and old-school American muscle cars, with an included spoiler that sits behind the keyboard as a stand for a laptop. Why KnewKey did not decide to attach the stand directly to the unit is unclear, though perhaps it was to allow for different sized laptops. The unit itself also has a small lip at the top of the keyboard which can hold up either a smartphone or tablet, unfortunately, the cut out is not large enough for the iPad Pro, which can only be used in portrait mode.

The JBL speakers are powered by a 440mAh battery which promises 6 hours of use, while the 2200mAh battery for the keyboard will last a month on standby or 14 days of typing.

“Rocksete is not just a keyboard, it’s also a luxurious Bluetooth speaker!” said Fernando Hao, head of product design. “the Rocksete has it all: tactile and responsive keys, high-performance speakers, premium build quality, perfected details and so much more! We want this keyboard to surprise you once again!”