4 iPhone Filming Accessories to Use for a Budget Film Project 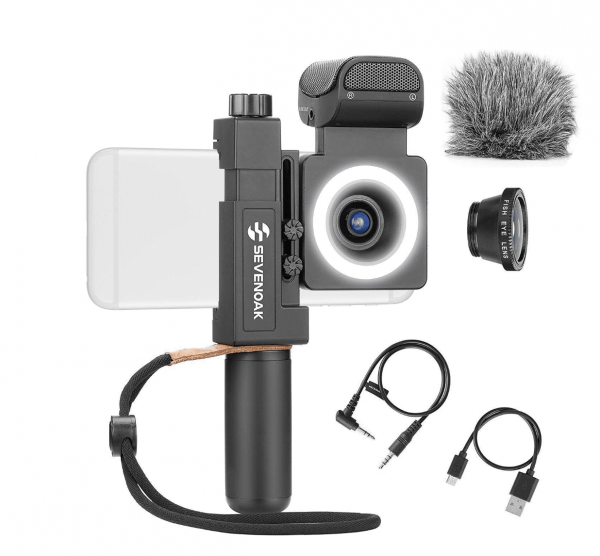 By Ben Halberstam, CEO of Movo

Smartphones are becoming increasingly intricate with the ability to capture high-quality videos and audio. While many people think they need an expensive camera and recording equipment to create a full-scale documentary or film, your smartphone actually has the capability to create something great with the right iPhone filming accessories.

Here are four of the top iPhone filming accessories you can pick up and start implementing in your filmmaking right away.

If you’re creating a film, you’ll need to invest in a smartphone microphone to really capture sound effectively and reduce background noise to produce a professional product. These devices tend to be relatively small and easy to transport.

Smartphone microphones usually feature a small aux plug-in, allowing you to attach the mic directly to the phone. However, this means that you’ll always need to keep your phone and mic near each other. You can opt for a large standing mic or a small, clip-on mic, perfect for interviewing people on the go. When you use a smartphone microphone, you’ll be able to pick up more of the conversation and create a crisper sound than your phone’s built-int your phone’s recording device.

A stabilizer may be the most useful iPhone filming accessory because it keeps your device steady as you record, making the final product less shaky and more professional-looking. Even if you think you’re keeping your hand completely still, chances are, when you re-watch the recorded video, you’ll notice a lot of moments when the image is shaky or not correctly centred on the image.

Stabilizers are incredibly useful for eliminating this problem. iPhone stabilizers use a clamp to keep the phone in place and feature a grip, from which you can hold the entire device or a tripod for an extra level of stability.

Lighting is super important when it comes to creating a film. Without the right lighting, viewers will struggle to see the image or your film may end up looking like an old home video. The lighting of a movie sets the tone in each scene. Most of your video recording will likely be done inside, which is where you’ll need to integrate your iPhone filming for studio lights.

Your smartphone microphone will help pick up higher quality sound, but your audio mixer set-up can help further improve the quality and eliminate distracting background noise. Audio mixers feature various channels, which is where your mic would be plugged in, and then offers different options for altering and mixing the sound.

Creating a film project doesn’t have to be a budget-breaking expense. With some simple accessories, such as a microphone, stabilizer, lighting set-up and audio mixer, your smartphone can make high quality video productions easy and affordable.