Prusa Research have just set a new world record by running 1096 Original Prusa 3D printers at the same time. The record has been added to Guinness World Records. 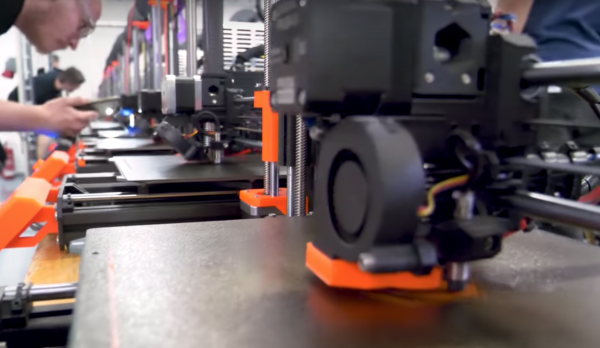 More information and link to video below

Prusa Research is among the world’s largest producers of consumer-grade 3D printers. Recently, the company announced that over 130.000 3D printers have been shipped to customers worldwide from its headquarters in Prague, reaching a 10% global market share (based on numbers from Wohlers Report 2019). With a record entry in Guinness World Records, the company seeks to help popularize 3D printing among the general public by showing the reliability of these desktop factories.

If you fancy picking up your own 3d printer on a budget, take a look at Hotrate.com for a guide on the best 3d printers under $300.

The record for most 3D printers operating at the same time was previously held by Airwolf3D, a California-based company, with 159 machines. For the new record set by Prusa Research on August 16, 2019, all 1096 3D printers had to be started within 5 minutes and had to finish printing their parts successfully.

Unofficially, Prusa Research has been breaking the record for several years. The company operates a so-called ‘Print farm’, a large hall housing 550 Original Prusa 3D printers running 24/7. These machines produce the parts for new 3D printers, which are assembled in Prague and shipped to over 160 countries worldwide. This method, compared to e.g. injection molding, brings a number of benefits, such as the ability to quickly implement new changes and improvements without the cost of new tooling. This helps ensure that customers always get the latest and greatest version of the products without lengthy waits for new production runs.

However, for the official attempt, which was supervised by a representative of the Guinness World Records® company, the goal was set even higher: 1100 3D printers in one room. This required bringing all 3D printers from the building to a single location, including machines usually used by employees for research and personal projects. The successful record-breaking attempt also proved the reliability of Original Prusa 3D printers with 99.64 % of the machines completing their task.

“Every day, we print parts for up to 300 new 3D printers in our ‘Farm’. Also, you can find at least one 3D printer in every office in the building, including the accountant’s and sales team’s offices. Our attempt to break the record is also a reminder how universal and widespread 3D printing can be – you can use it in production, for prototyping or even just for fun,” says Josef Prusa, CEO of Prusa Research.

Prusa Research’s 3D printers are open source. This means that blueprints, source codes and project files are available online completely for free. This allows the 3D printing community to download and modify these assets, come up with new features and push the industry even further. Over 80 % of Original Prusa 3D printers are sold as kits, which the customers assemble themselves. “We are helping to raise a new generation of makers – people, who like to learn how things work and how to repair them. There’s a lot of creativity in the process, too. I believe that our growth also signifies that the DIY movement is not on the decline – on the contrary!” says Josef Prusa, CEO of Prusa Research.