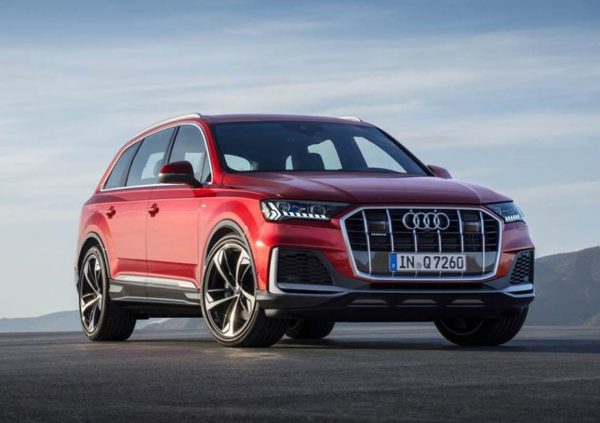 Audi has just launched its new Audi Q7. Inspired by the improvements in the Q8, the Audi Q7 now has the following advances:

Audi have also helped us produce this amazing video which highlights the tech features of the new SUV:

Read the full release below:

The Audi Q7 makes a technological leap this month to fall into line with its Q8 counterpart, taking on board the latest engine updates, mild hybrid drivetrain developments and cabin digitalisation innovations first seen in the coupé-inspired flagship of the Q range. Its exterior hardware also benefits from a reboot, and now combines crisper detailing with the latest design hallmarks characterising the Audi Q model line. Seven seats, adaptive air suspension and Matrix LED headlights are among the headline standard features for all models in the UK launch line-up, which is equipped to either Sport, S line, Black Edition or top tier Vorsprung specification.

Robust look: the exterior design
The Audi Q7 demonstrates the hallmark SUV elements of the current design language. It adopts the large octagon-shaped Singleframe with its six upright slats which creates an even more powerful impression from the outset, and its two-part side air inlets have a much more expressive line, as does the sill area that draws attention to the large SUV’s considerable ground clearance.

The headlights emphasise the width of the full-size model with their contour and light signature. They feature Matrix LED technology as standard in Sport, S line and Black Edition versions, with an upgrade to HD Matrix LED units with Audi laser light reserved for the Vorsprung. At the rear, a striking chrome strip creates the visual connection between the flat rear lights with their technical-looking graphics and carries forward the horizontal body line. The designers achieved the clear view with taut, flat surfaces, which span the entire width particularly in the license plate area. In S line models and above a blade in the front bumper, accentuated underbody protection at the rear and a full paint finish create an even more striking look in conjunction with alloy wheels measuring 20 inches in the S line, 21 inches in the Black Edition and 22 inches in the Vorsprung. Sport specification includes a 19-inch wheel.

Sporty on road, powerful off: the suspension
Audi has substantially enhanced the dynamic facets of the Q7. The latest car is manoeuvrable, precise and agile in urban traffic and on hairpin bends, particularly in Vorsprung specification which includes all-wheel-steering as standard. It also facilitates supremely comfortable and poised touring with excellent ride comfort on motorways, helped by the adaptive air suspension that is factory fitted to all UK specification versions. This also provides variable ground clearance and prepares the Audi Q7 with its standard quattro drive for terrain off the beaten track. The relevant offroad mode can be selected via the standard Audi drive select dynamic handling system with its seven profiles. Black Edition and Vorsprung versions are equipped with the slightly tauter adaptive air suspension sport with a lower ride height than the standard air suspension system.

Mild hybrid technology standard: the drivetrain
All of the engines in the Audi Q7 are coupled to an eight-speed tiptronic and quattro permanent all wheel drive. A choice of two diesel engines will be available at market launch, and shortly afterwards a petrol unit, followed also by a plug-in hybrid model, will join the line-up. The standard mild hybrid technology plays a major part in the efficiency of the engines.

It can reduce consumption by up to 0.7 litres per 100 kilometres. Its central component, the belt alternator starter (BAS), powers a 48-volt main electrical system in which a compact lithium-ion battery stores the energy. During braking, the BAS can recover up to 8 kW of power and feed it back into the battery. If the driver eases off the accelerator at speeds of between 34mph and 99mph, the Audi Q7 recuperates energy, rolls at idle or coasts for up to 40 seconds with the engine switched off. The BAS restarts the engine the next time the accelerator is depressed, and does so faster and more gently than a conventional starter. The start stop range begins at 13mph.

Luxury-class lounge: the interior
During the redesign process, the large SUV has grown in length by 11 millimetres to 5,063 millimetres. It is 1,970 millimetres wide (2,212mm including mirrors) and 1,741 millimetres (including roof aerial) high. Versus its direct competitors the Q7 has a greater interior length as well as more headroom and elbow room in the front and rear. A host of storage compartments, a new compartment in the instrument panel as well as the high load capacity provide functional utility value. Depending on the position of the rear seat backs the luggage compartment on the seven-seater version offers between 865 and 2,050 litres of capacity – the latter with a flat load area. An electric tailgate is standard, and when the optional Comfort and Sound pack is specified it also brings foot-activated gesture control for even easier opening. Versatility is further increased by the standard rear bench seat plus, which adds individual fore/aft movement and backrest angle adjustment for all three seats.

The cockpit architecture harmonises perfectly with the new, digital operating concept, which incorporates two large touchscreens. They provide haptic and acoustic feedback when clicking on the touch controls. When off, the top display blends almost invisibly into the large black decorative surface. All elements refer logically to one another, from the flat air vent strip to the wide console on the centre tunnel.

Equipment across the Sport, S line, Black Edition and Vorsprung tiers befits the Q7’s positioning in the Audi model family, particularly the Vorsprung versions which take luxury and convenience to the next level. With their 22-inch wheels, S line detailing and black styling pack they show the remodelled Q7 body in its most impactful light, and their powered soft-close doors set the tone for the exceptional comfort and luxury within. Occupants are treated to ultra-supportive front super sport seats with diamond-stitched Valcona leather upholstery, climate control and massage function, plus an extended leather pack taking in the door pull handles, armrests and lower door trim, the front centre console trim and the underside of the instrument panel. Seat heating is also expanded to the second row, and attention is even lavished on the roof, which gains a soft-touch Alcantara headlining. The 3D BOSE surround sound system is also installed to fill the interior with virtually cinematic sound quality.

To complement the now fully digitised instrumentation, the MMI navigation plus (which is standard across the range) delivers top-of-the-line connectivity by incorporating LTE Advanced, a Wi-Fi hotspot, natural voice control and the extensive Audi connect portfolio, opening up everything from online traffic information and navigation with Google Earth to hybrid radio. The cloud-based Amazon voice service Alexa, which is integrated into the MMI operating system, is also new.

Vorsprung models are also fitted with convenience technology such as the Audi Phone Box to provide wireless charging for all Qi-enabled mobile phones, a head-up display projecting important information such as vehicle speed and assistance system notifications onto the windscreen and a particularly extensive portfolio of automated driver assistance systems. The list covers virtually all the bases, from side assist, lane assist, cross traffic assist rear and turn assist to camera-based traffic sign recognition and the predictive efficiency assistant promoting the most economical driving style.