Skip to content
Home » Do the Oscars need to change to appeal more to the public?
news

Do the Oscars need to change to appeal more to the public?

It’s that time of the year again. The movie industry’s biggest and most dazzling night in the calendar, broadcast around the world with the stars attending in their finest attire. Or at least the ladies are. The men tend to look the same each year.

Who will win each of the coveted golden statuettes? Who will give the best acceptance speech? Do you care? Given the extensive coverage on both television and in the media, you would expect a lot of people to be interested in the results. And yet viewing figures for the 2018 ceremony fell to an all-time low, according to the Hollywood Reporter.

Recent years have seen the Oscars having to navigate around controversies and sensitive topics, such as the #OscarsSoWhite and #TimesUp hashtags on Twitter. America’s political environment has also made the awards a platform for statements regarding the current President. This year has been no exception in the controversy stakes, going without a host for the first time in decades. And all this before we even get to this year’s nominated films.

Marvel’s Black Panther being nominated for Best Picture, the first time ever for a ‘superhero’ movie, is a definite plus for Academy history. Other Best Picture nominees however, have faced criticism over their authenticity or filmmakers’ professional conduct. Green Book’s true story was accused of being a “symphony of lies” by the family of Dr. Shirley, played by Mahershala Ali. Bohemian Rhapsody was accused of erasing Freddie Mercury’s sexuality, portraying a sanitised version of him. In addition, Director Bryan Singer’s firing and allegations of sexual misconduct have attracted scorn that the film should receive awards.

Even current Best Picture favourite, Roma, has raised eyebrows that a Netflix streaming film should qualify for entry at all.

It is also incredibly disappointing yet again to have no female nominees for Best Director, given the past year has produced many exceptional films led by women. Off the top of my head, I think Lynne Ramsay’s You Were Never Really Here, Karyn Kusama’s Destroyer and Debra Granik’s Leave No Trace were worthy of a nomination. But given that in its 91-year history, just five women have ever been nominated for Best Director, perhaps that is too much to ask. The Academy can and should do better.

Roma is undoubtedly a beautiful film, crafted with love and creativity. But it doesn’t necessarily rank highly on the entertainment scale. This is something that has resonated through the years of the Oscars. The nominated films are rarely ones that the public saw and enjoyed on a large scale. On Twitter this week, I saw this interesting infographic from Visme, illustrating the box office gap between Best Picture winners and highest grossing films. In the last 18 years, only one film has matched the biggest box office with Best Picture – Lord of the Rings: Return of the King. 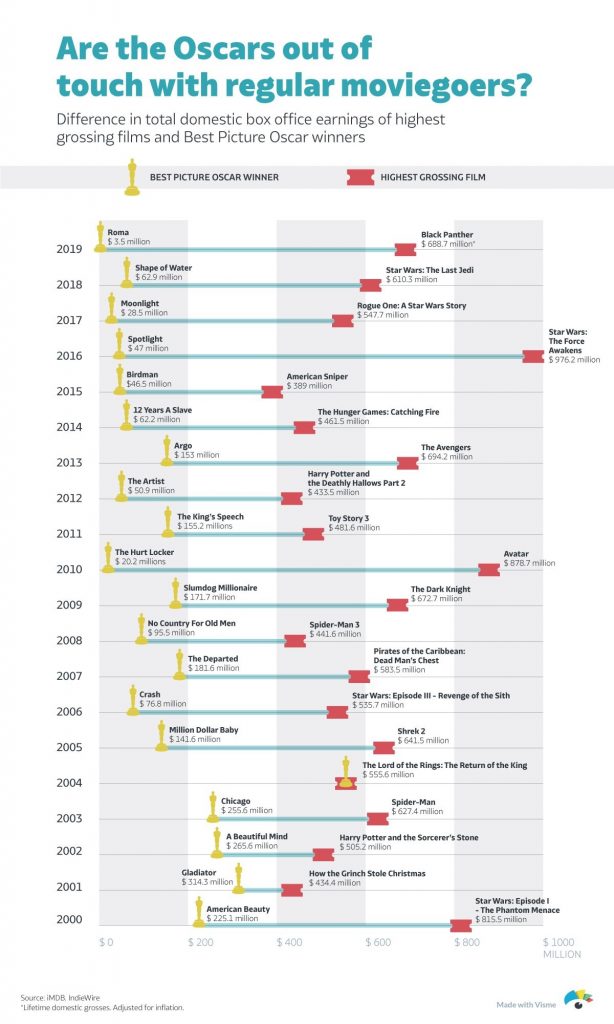 Perhaps this is the primary reason that viewers are no longer interested in watching the Oscars? The awards do not tend to match up with the films that people have seen and loved. The kind of films that you buy on DVD when they come out and are watched many times with pleasure. But then, hasn’t that long been the case? The Academy has overlooked some incredibly popular films while rewarding those with high artistic merit. Hollywood also loves patting itself on the back, and I can’t imagine it’s going to stop any time soon.

Is the situation changing? The make up of the Academy is slowly becoming more diverse. This will hopefully lead to a broader spread of films getting nominations in the future. Should the Academy just embrace the fact its purpose is to reward its own and forget the public viewing aspect? There are other awards honouring more popular films, such as the Empire awards. What changes could the Oscars put in place to make the awards more popular again?

Whoever wins tonight, it’s clear that further change is on the way. And in case you’re asking, I would like Spike Lee’s magnificent BlacKkKlansman to take Best Picture.