Acer Nitro 5 – A gaming laptop on a budget 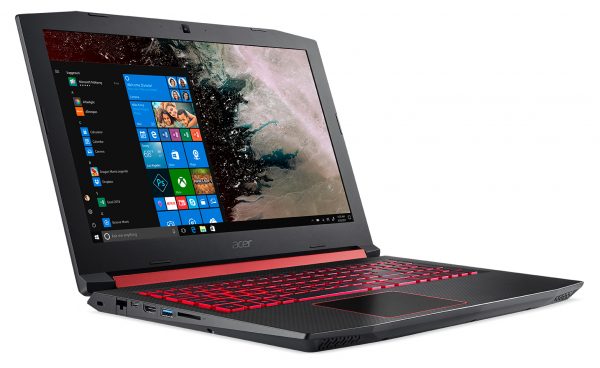 Gaming has long been all about the PC. Gaming laptops have always existed, but quite frankly, they have struggled. Acer has been on a mission to change this, and with beasts like their Predator series, is well ahead of the competition. However, not everyone is in the market for a very expensive laptop, and for them, there is the Acer Nitro 5 series. What makes this affordable is the Ryzen processor from AMD. With RX Radeon graphics, you suddenly have a decent gaming laptop below £700.

Oh, and if you remember my rare video about Acer’s gaming tablet, I kept mumbling about how it looked the part. The Nitro 5 doesn’t disappoint in that department either!

The model we were sent to review came with the following specs and features: 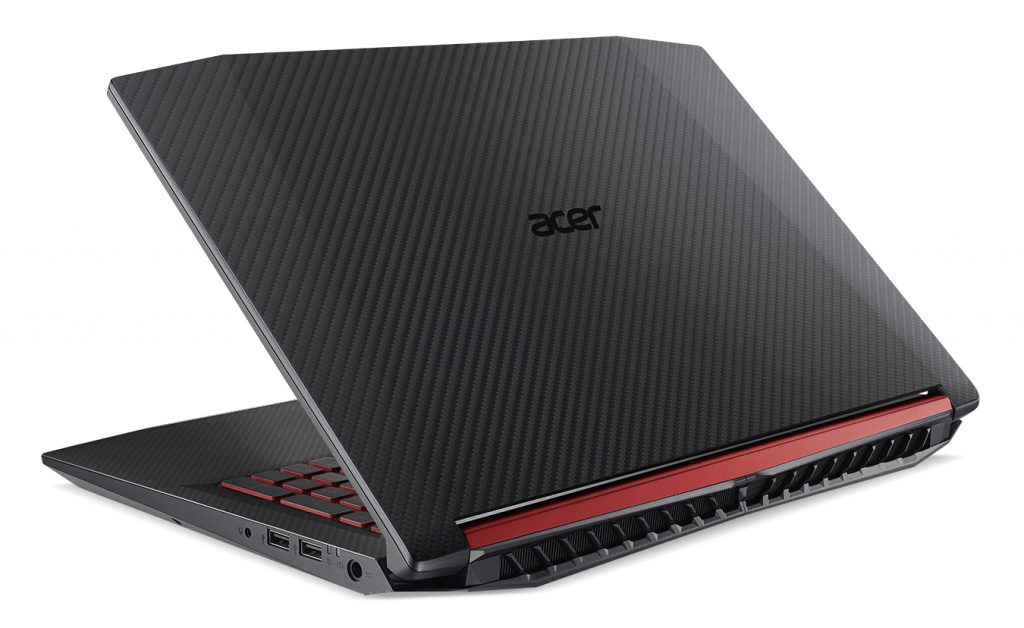 With its sharp edges and bold curves, this is a laptop designed to make an impression. The mix of black and red is now a characteristic of Acer’s gaming range and the Acer Nitro 5 is no different. At 2.7kg though and almost 27mm thick, this laptop is designed to mean business! 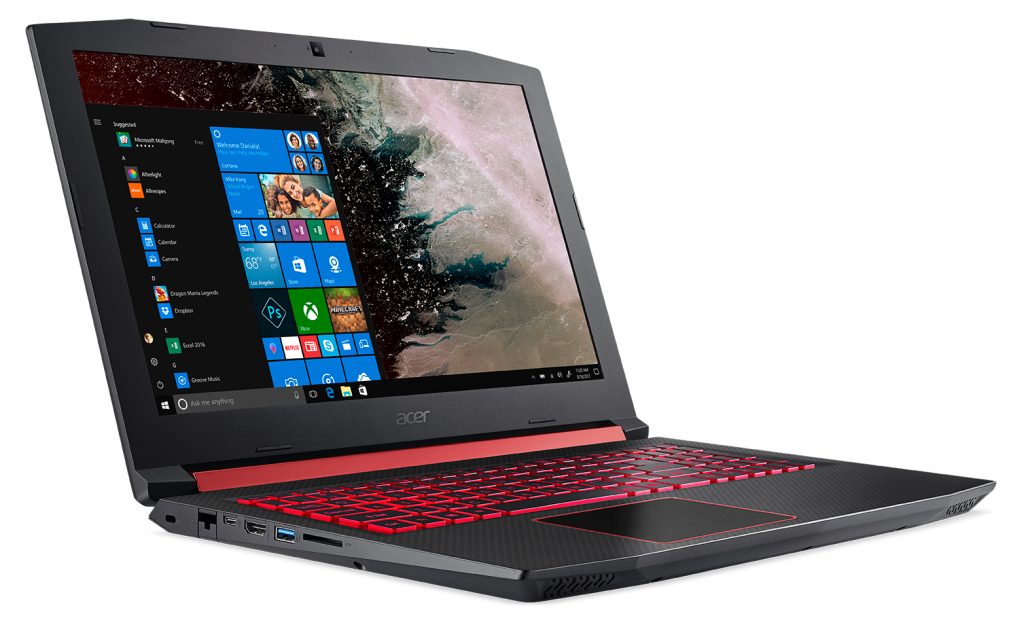 The bigger size means you get a really good screen, all the ports you want, and a really nice keyboard.

The vents sit at the bottom and the back, and with CoolBoost technology, you can really feel the fans go. 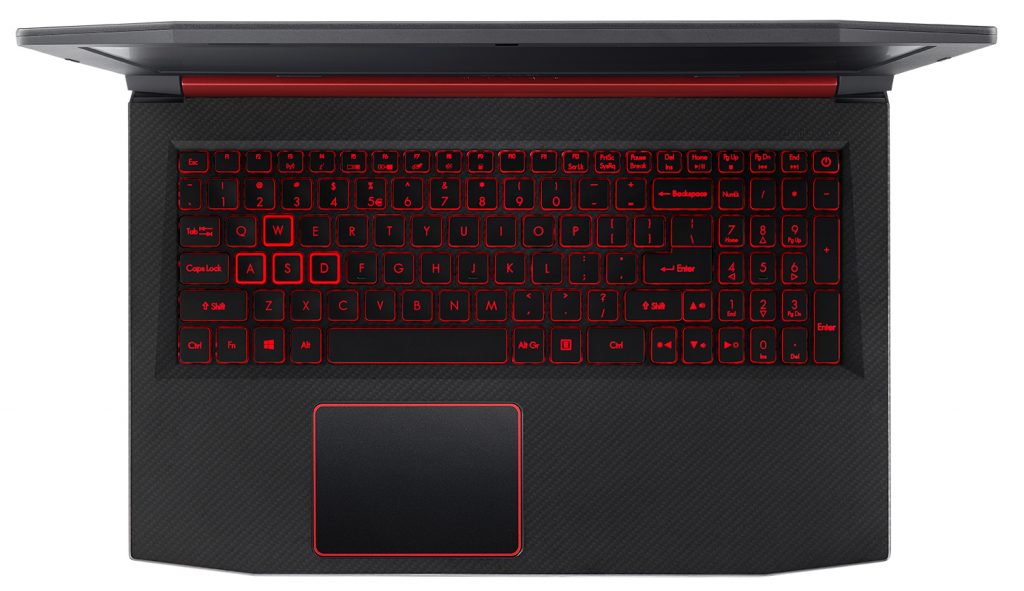 Okay, if there is one thing that definitely leads to bit of a bad first impression is the keyboard. In order to fit the 15″ screen size, the keyboard has taken the ‘compact’ route. This comes at the advantage of including a number pad on the laptop. That is great, and obviously a big plus when you are gaming. However, for generic typing, I found the rather small Right SHIFT key was quite annoying. I kept pressing the Up arrow instead of the Shift key in my early trials of the laptop. However, like all other things, one does get used to it. But yeah, be prepared for bit of a muscle memory shock when using that key.

The keyboard itself is lit, though the light goes off by default seconds after you have left it alone. It is lit in ‘gaming red’, which obviously helps the mood!

What makes the keyboard great is how comfortable it is to type on. You get a nice soft press of every key, and it is pretty much silent. One of the better keyboards out there!

Makes it a really good laptop for both generic typing as well as hours of gaming.

And oh yeah, the Power key is also located on the keyboard, which makes a change from your traditional Windows laptop.

I haven’t followed the AMD journey for a while. Back in the late 90s, AMD suddenly emerged as a competitor to Intel. They offered processors with similar specs but at lower prices. Seems like a win for everyone, right? Not really. They came with different sockets and somehow the performance just wasn’t the same as an Intel device. While they never really disappeared, they never quite became the alternative to Intel they wanted it to be.

Almost two decades later, AMD are back with a much bigger bang. The Ryzen series has helped them make their mark on the world of gaming as well as video editing. The original Ryzen 7 was released to compete with the Intel i7, followed by Ryzen 5 to fight the Intel i5. The numbers look similar, but the performance is different once again.

The Ryzen 5 has been designed to focus on multi-threading applications. This means that while your document editing or your Chrome browsing may seem a bit sluggish on this device, your gaming, video processing or 3D rendering will suddenly go up a notch.

This makes using this device quite interesting. Open up a lot of tabs on Chrome and you can actually feel the device struggle a bit. Not the ‘fans come on full blast’ struggle, but just that bit of sluggishness you see from regular devices.

However, turn to gaming, and this device suddenly seems to fly. It feels a bit odd. Imagine taking an old Vauxhall Corsa or Nissan Micra on an icy day and see it beat all the Mercs and BMWs with their fancy rear wheel drives. It is an odd winning sensation. Suddenly, you realise why this device looks like it is. It is a modern day steampunk contraption, which flies as soon as it is given the right task, but feels ordinary otherwise. 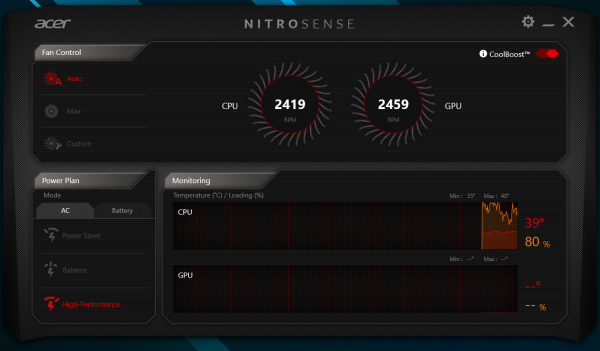 Also included as part of the laptop software is Acer’s NitroSense. This allows you to customise the performance as well as cooling of the device. In case you are wondering, the maximum speed the fans go is 5172 rpm.

The CoolBoost setting will automatically turn the fans on to a higher setting when the PC is working hard.

This does make me point out an observation. This laptop has vents at the bottom, and is not really designed to be used on your lap. A good solid table is the place to be.

The average output of battery from this is rated at 5 hours, though an intense gaming session may bring that to around 2-3. The supplier power adaptor is an absolute unit, which only tells you how much power this device will take when it is running full flow.

In average use of browsing and watching videos, this is closer to the 5 hour mark.

As they say, Netflix is more scared of Fortnite than HBO. No gaming laptop can be complete without being a powerhouse of multimedia performance, and this laptop is no different. The speakers are powered by Dolby Audio premium and the screen itself offers great detail and a wide viewing angle. Needless to say, if you did want to watch a movie with this laptop on your lap, you wouldn’t be disappointed.

This laptop is so affordable that I feel like it needs a special mention. On the face of it, an Intel i5 with 8GB of RAM and a dual Hard drive won’t cost you much more than £600. However, not many of those can even pretend to be a gaming PC. This one does it all and throws in a graphics card for just under £700. Pretty awesome if you ask me!

You can see all of the Acer Nitro 5 range at the Curry’s website. The device we were sent to review is £699, while other devices in the range vary around that mark.

As you will see on the website, they do come in Intel flavours as well.