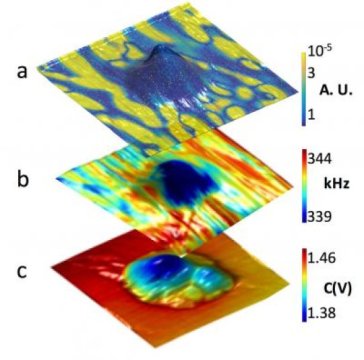 We all know the place of silicon chips among all electronics today. They have become indispensable as all electronic products have come to make use of these computer chips. While they have become so attached and important to our equipment, they have some demerits. This is why research is a continuous thing; to find a way around some existing but complex tech products. As a result, researchers have discovered a sort of replacement, which is more efficient, cheaper and lighter for this tech system.

The process of producing this present silicon chips involves a rather multi and complicated steps that make use of too harsh chemicals in etching circuits to chips. With the introduction of a new device known as sandblaster, an atomic scale, there is going to be an obvious change to the original product. This was brought about by the researchers at Oak Ridge National Laboratory. This team led by Ovchinnikova and Belianinov came up with another method, which make use of growing nanostructures instead of etching.  These are common in materials and computer chips aside the silicon. In their bid to test the quality of this newly developed product, it was used on a layered material (bulk copper indium thiophosphate).

This team worked on an ultra thin, 2D material, which is far lighter than what has been in existence with most electronic gadgets. The complexities and other associated complications of the process of the previous system has been done away with as a result of the new development  because the new method allows both direct writing as well as editing of circuitry on any 2D material with less stress. The sandblaster is a helium (ion) microscope, which is majorly used in cutting and shaping any matter. It is certain that this new system can be used in the replacement of silicon. It will be a better alternative for most applications especially the semiconductors within them.

The next concern now is what will replace silicon in most transistors going by the fact that sandblasters will work or can be used to replace silicon in other apps. So, for such expectation and concern of a possible replacement material, let’s take a look at 2D devices. They have low power consumption rate, easier as well as cheaper to fabricate and produce. They do not require any harsh chemical, which can act as potential danger to the environment in which they are being used. This is why these materials (2D electronics) can be used as substitutes for silicon. While they are not only suitable for the planet as a whole, they are also desirable for both consumers and all industries.

Using 2D related equipment not only reduce power consumption, but also, in a way, function to improve the performance of battery and its general longevity.  This implies that an individual can go on for about 4 weeks without the need to worry about phone battery running down and even recharging it. For it to be successfully incorporated into these materials there might be size reduction to make it thinner.