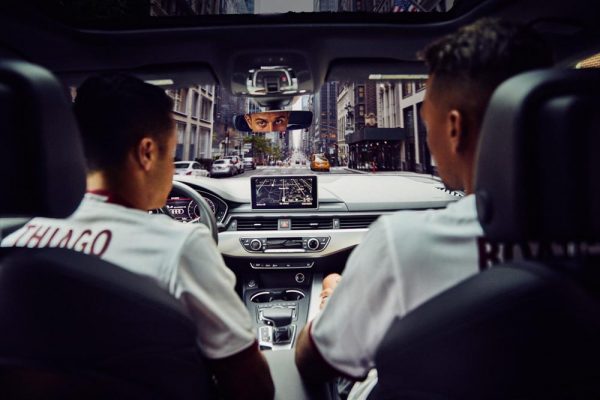 What would you do if you had to pick your own team from a whole city? The interesting challenge was presented to the FC Bayern Munich players by Audi, where they had to drive around New York and find themselves a team.

The premise was simple. The Bayern Munich boys were divided into two teams: Boateng and Thiago vs Vidal and Ribery. Both teams were given an Audi A4 TFSI Quattro, offering a combined fule consumption of 5.9-6.3 l/100km, and CO2 emissions of 144-136 g/km.

The boys then had to drive around New York City, taking advantage of the Audi Connect technology as they scouted around for their ultimate 5 a side team.

New York is no easy city to drive through though, with over 8 million people, and over 4 million vehicles on the move!

During their mission, Audi connect technology helps the footballers traverse the city. The technology offers the following:

Just head to the link to find out more.

As time was key, watch the video below as the players travel around NYC, finding themselves places such as Skateboard parks to head to using the technology. Be it the need to tease the other players, or just post your latest player on social media, the Audi Connect technology helped the Bayern Munich players do it in style.

Watch the video below to see how they got on.