April 19, 2015April 19, 2015
This is the age of virtual reality. With the Occulus Rift being a major star at most tech shows, and the likes of Microsoft Hololens making everybody squeal in anticipation, there is no doubt that the very idea of this brings some excitement to the common man. VR is not new though, and has been around for ages. However, we are entering an age where it seems the technology is finally catching up with the concept. Only problem being that a VR headset still costs the same as a television, and nobody can really argue why not.
There is hope though, a range of cheaper VR headsets are appearing on the market, and even Google has introduced the Google Cardboard. They work by using your smartphone as a screen. One such headset is the Archos VR Headset, and we look at it here. 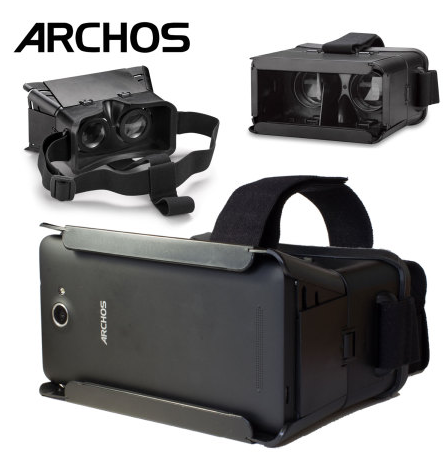 For something that costs about £20, you shouldn’t really expect this to look anything like one of the premium end models. So the plasticcy feel this offers isn’t really that odd.
However, it does follow true the general industry concept in one sense. You look odd wearing it!
Jokes aside, it comes with a couple of rubber straps that allow you to mount it on your head. A little curve allows you to place your nose in, which helps you identify the right side up. A few reviewers complained that they felt this ‘nose curve’ to be a bit uncomfortable, but I have nothing of this sort to report.
A rubber grommit goes all around the face end, which also means that holding this against your face is comfortable as well. I kept the straps loose, but you can adjust them if you like.
Inside are a couple of lenses, for each eye, which can be screwed in and out for focus, and moved left and right to adjust for your eyes. There is no room for glasses in there, but you can adjust the focus using the focus ability on the lens.
The other end houses your smartphone. This expands to hold almost any smartphone, with tabs that can open to adjust in all four directions. Rubber strips make sure you don’t scratch your phone.
Overall, it doesn’t feel to heavy, and works okay.

Normally this comes in a regularly labelled box, but since mine was a review sample it came in an unmarked box. Nothing odd about that. However, there aren’t many instructions that come with this either, and if you install the Google Cardboard app, it helps if you can scan the QR code of the box.
Google Cardboard wouldn’t work with this though. The main problem being that you need to click on your phone with it, and this doesn’t allow that.
So, you have it, but how exactly do you use this? Luckily, there is a whole suite of apps out there that will work with this, despite you  not being able to click. Some of them require a Bluetooth controller, such as games, while others need a few clicks and then off it goes.
On the Play Store, which I tested this with, just search for ‘VR’, and you’ll see them all.
There are apps to play films in 3D, demo videos, and lots and lots of games.
The Archos website has a handy list of apps you can try too:
http://www.archos.com/gb/products/objects/cself/avr/application.html?#menu

The Archos website has a handy chart to let you know what works:

Unless you have a 4K screen, don’t expect to be blown away by the image quality. Using a simple full HD Galaxy S4 to test this, I was quick to notice that the screen appeared highly pixelated. The magic though, is all about your head movement. You can see all around, instead of just in 2D, and 3D works way better than any cinema experience I have had so far.
As far as gaming goes, it is great, but at times it can be awkward depending on the game you play. If you have turn around too much, and constantly, being sat down doesn’t help. Being stood up in the living room won’t work either, as you can’t really see around you.
For me the best experience was that of watching 3D films, and if you want to try that, this is the best and cheapest possible way to do it.

Can I wear headphones with these?

Yes, though you need to be careful when you take the headset off just in case they don’t get tangled with each other.

More information on these can be found on Archos’ website:
http://www.archos.com/gb/products/objects/cself/avr/index.html
They retail for around £25 at various online retailers.

The joy of these is directly dependant on how good the apps are, and that is where the question lies. Secondly, it depends on the screen of your phone. This provides a great, cheap interface to a magical world of 3D experience.
archos, archos VR, headset, hololens, occulus rift, virtual reality, VR