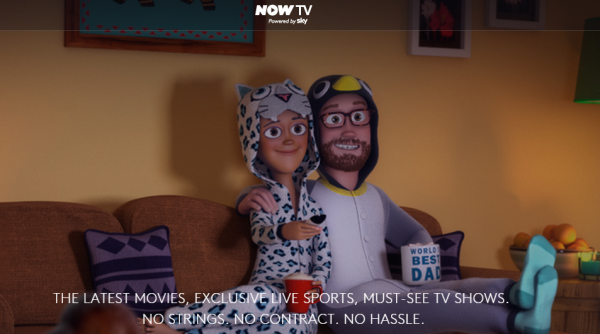 Now TV is a service from BSkyB, also known as Sky TV to most consumers, which allows you to get live shows streamed to your mobile devices, tablets, PCs, etc. The package offers Sky TV channels, Sky Sports channels (a different subscription) as well as Sky Movies on a different subscription. Also offered are various boxsets, depending on your subscription, as well as a chance to watch old shows from Sky. Think of it as a 4OD/BBC iPlayer, but from Sky. It generally retails for £8.99 a month, after a free trial of a month.

So what does Vodafone have to do with this? Basically Vodafone, apart from the services they offer you in terms of your phone calls, texts and data, offer you certain extras. These extras include services such as subscriptions to Now TV, Spotify, Sky Sports and Netflix. Generally one of these is included with Vodafone Red plans. You can visit the following link to find out more about the services offered:

This means that you get the service, worth £8.99, included for free in your subscription.

How to enable Now TV for yourself through Vodafone

There is no way to enable Now TV, or lets say I found no way of enabling Now TV, from the Now TV website. It was rather easy to do so, via the Vodafone website. All you do is click on the following link, which is just the next one on from the link up there:

You can then click on the ‘follow the link’ bit, which only works if you have it already activated:

Here you enter your phone number, and if the service has been activated for you, you can choose a pass for yourself, and then sign in or sign up (if you don’t have an account with them) to the service you wanted.

The method applies for any of the entertainment passes you may want.

So, what does one get for the Entertainment Pass?

You get the following channels:

You get to watch shows that have been played, on all the channels, as well as boxsets. There are handy collections, such as Best of British, Best TV Box Sets, Catch Up etc to help y ou choose what to watch.

Basically, if you are into new telly, and can’t wait for the box sets to come out, Sky is the place to go to in the UK, and if you don’t want to subscribe to Sky, NOW TV is a hassle free way to still get it all.

How do I use the service?

You can use the service via apps on your Android and Apple devices. This works on most tablets and phones. If you have Chromecast, you can also ‘cast’ to your TV via the app. A lot of Smart TVs also feature the Now TV app, such as LG and Samsung. Using either of these will let you use the Now TV app.

So I have a subscription. Can I use it anywhere and on any device?

Anywhere, yes. Assuming you have a running internet connection.

Any device? Not quite. You are limited to 4 devices, 2 of which can be watching something at the same time. You are allowed to change/add/remove up to 2 devices a month.

How good are the apps?

Mostly simple interface and an easy way to search means you are mostly good to go.

What will I not get?

Since the service mostly gets its media from Sky, you are mostly restricted to what has been on through the 13 channels. Box sets will offer you more, but it will be stuff that has been aired by them.

Sky has offered a good service that allows you to get most of what they offer through the box via the internet. Yes, it won’t beat a Sky Box, but it cuts through a lot of what you don’t want. Also, since most of us hardly get time to watch live telly, and end up streaming most of our shows, it is only natural that Sky got in the game too, although at a price. Vodafone’s Red offers to take that price out of the mix, letting you enjoy entertainment free, and on the go.