LG OLED – The future of TV

Much like a television advert seen on your old television, pictures never really do televisions justice. In fact, looking at them in a shop doesn’t do them much justice either. The only way to really see how good a TV is by having one of those lazy days where you do nothing else but watch TV. Of course, this is my mantra, and not by LG, though I imagine they wouldn’t mind it.

Anyway, I was at the LG headquarters yesterday, and they talked all about the new range of televisions they are about to introduce to the market next month, the LG OLED TVs.

Now OLED isn’t exactly new. In fact, being an electronics engineer who used to work with UV LEDs a lot, the word OLED kept popping up time and time again. It sounded futuristic, somehow better (O stands for Organic), and yet never really impressed us. It had reliability issues and was expensive too. There were some concerns about lifetime of the product as well. Armed with all the concerns, I sat around looking at all the different TVs that were on display, and to be honest, they were impressive.

In the presentation and the demo that followed, LG presented key facts on why they were better than the others, and what makes LG OLED range the future of television. Here are a few:

LG isn’t just LG Electronics. They consist of an LTE business, LG Display as well as other businesses under the LG umbrella. LG Display is a highly R&D focused business that not only produces displays for LG products such as the televisions and phones like LG G3, but also supplies displays for products such as the iPhone and iPad. 20% of the LG display staff works in R&D to ensure this world dominance.

LCD televisions are traditionally based on three colours combination, namely RGB (Red, Green and Blue). LG is now introducing a 4th pixel to the mix, namely White, changing this to WRGB. The addition of the 4th colour means that the displays are able to produce more natural looking images, with more detail. 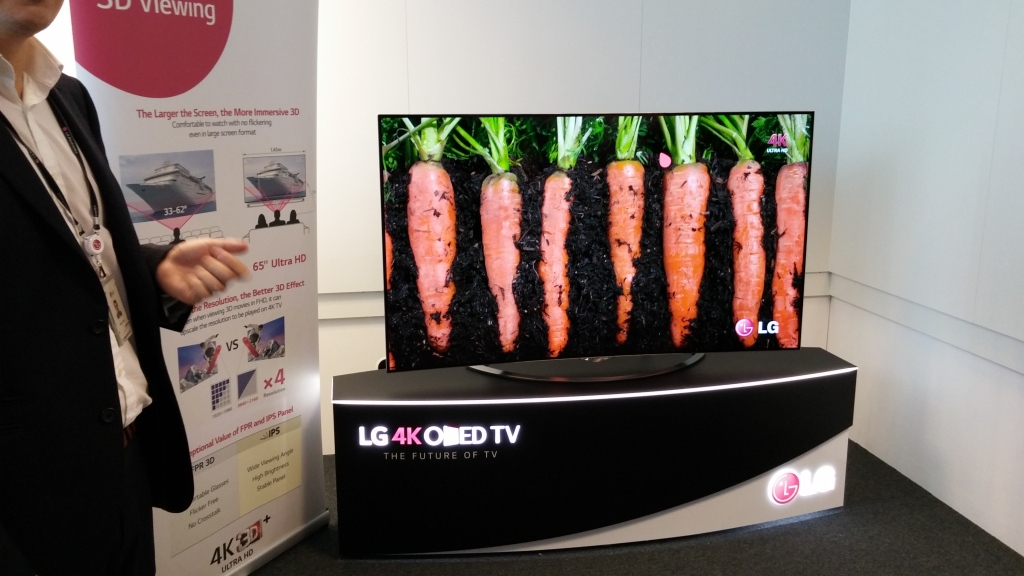 Part of the OLED magic is how good the blacks look. We tend to ignore this, but part of what makes a screen so good is how good the black is on a display. The best black is where the screen looks to be off. I have talked about this already when I have reviewed the Lumia phones, as they tend to have the best blacks I have seen so far. OLED brings the same kind of contrast to the mix, giving you an extremely sharp image.

Why is black so important? Any image of a night sky gets washed over generally on most televisions. A true black lets you see every edge of every building. 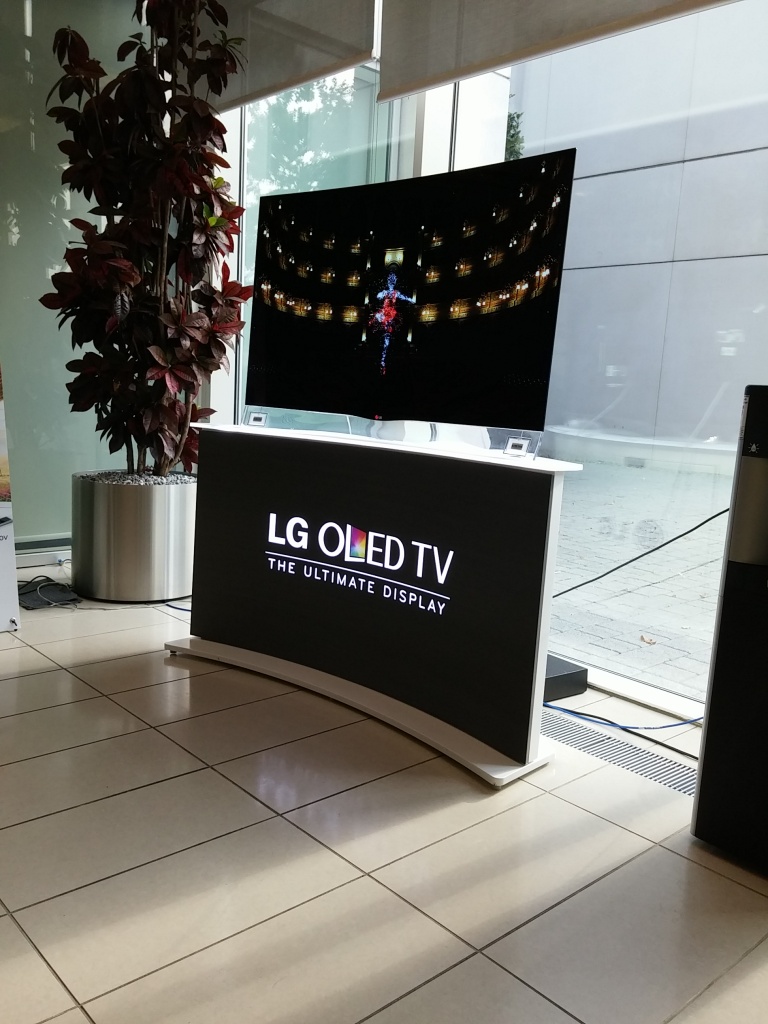 A major advantage to this contrast is also how good an image looks, even when put against sunlight as a background, for example in the picture above.

OLEDs emit their own light. This means that OLED TVs do not require back lighting any more. This means that you get rid of a major  component present in more televisions, making it both cheaper and thinner.

The biggest issue LCDs have and have had since the move from CRT is the bad viewing angles. The more you give, the more washed out the image becomes. OLED, thanks to a different technology, thinner setup, means that you get the widest viewing angle possible. 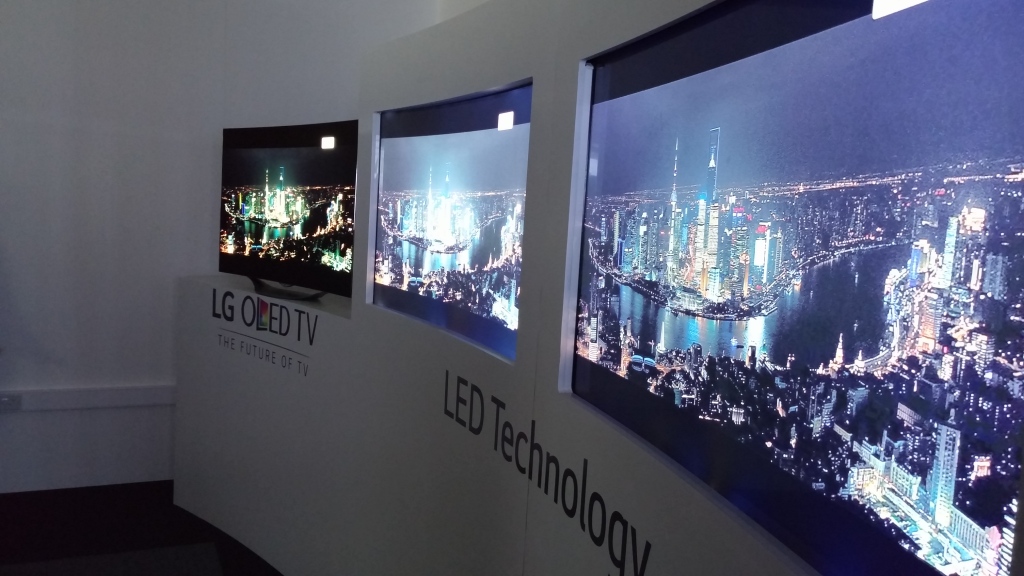 Into sports? The better your television’s update rate, the better fast moving action looks. Most televisions do a few hundred Hz of updates. The OLED technology can be as fast as an update every 0.1us. That is 0.000,0001 seconds!

New technology means less components. Less components mean a thinner television. This obviously means that the TV is lighter as well. For example, a 55″ TV is only around 5kg! 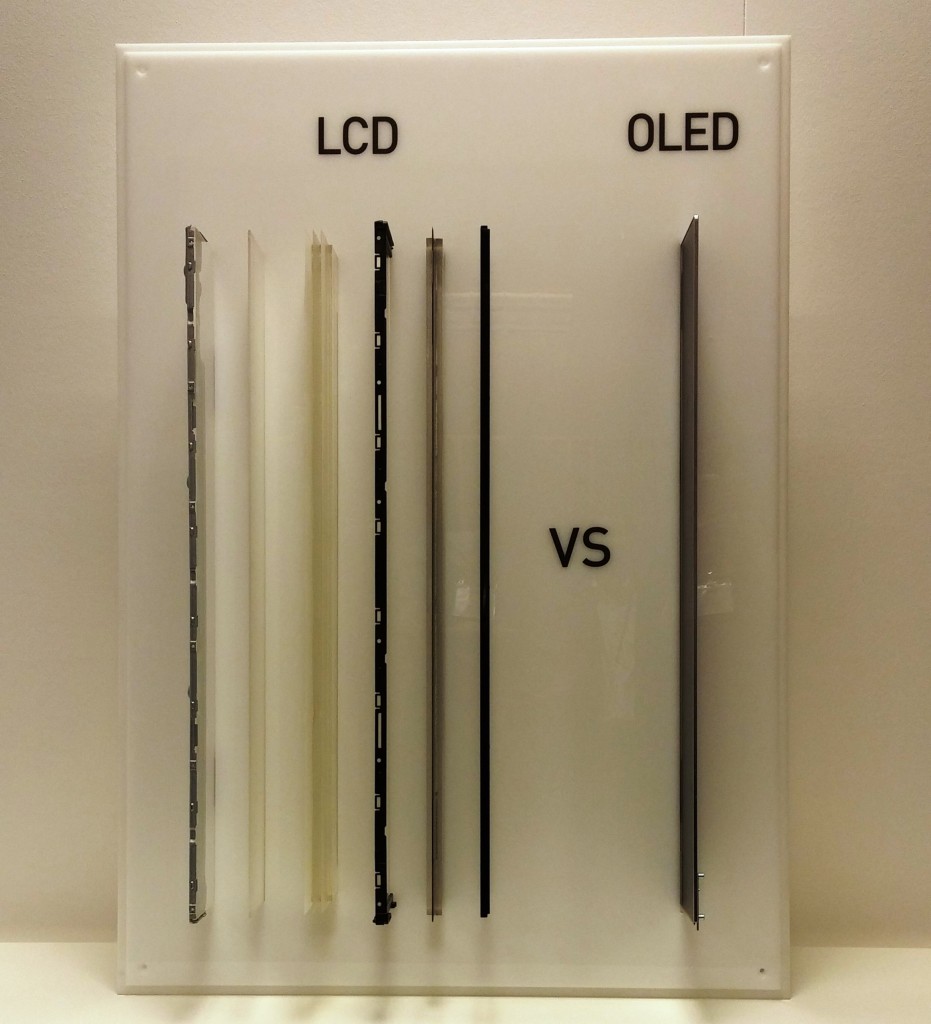 A special algorithm designed by LG measures the voltage threshold of each display element in an OLED screen. This means that it can measure exactly how bright the display is. Using this compensation algorithm, the television can give you a uniform display all over the screen.

Thanks to LG patented technology, the display can give you up to 25 candelas of brightness per amp.

Thanks to the WRGB colour combination, OLEDs can give you better colour response, which makes things look more natural. This means your images are less saturated, specially the ones shot in bad lighting, or at night.

Recent studies have shown that blue light causes eye fatigue, and often prevents us from falling asleep properly at night. LG has taken that research on board and special algorithms make sure that the eye is exposed to less blue light. This is another feature thanks to the W in WRGB.

No discussion about OLEDs can go without talking about expected life of the product. It is true that no OLED tv comes with an expectation of 30 odd years, but it isn’t all that bad. Unlike their predecessors, these promise a life of at least 30,000 hours, which gives you about 8 hours of television watching every day, for about 10 years. Not too bad if you ask me. Of course, if you watch your television on ECO mode, or watch less television altogether, you’ll get better life out of it.

LG is not really going to the small screen size with the OLED. Initially the sizes available will be 55″, 65″ and 77″.

OLED is better for curved televisions too, if that is what you fancy. Being thinner means there is less to bend, and much like paper, the thinner sheet can easily be bent while a thick book struggles.

Oh yes. So far we hadn’t seen any OLEDs featuring 4k, and LCD was dominating that market. OLED though, will be available now in 4K resolution, giving you the best experience ever. More so, the LG televisions give you in built upscaling, so your normal HD looks better than any normal HD television. More so, with the likes of Netflix 4K available in WEB OS directly on the television, there is plenty of content to watch and enjoy.

So, when is this going to wow your visitors at home? These TVs will be available to the general market from November 2014, and we frankly can’t wait!