I missed the Nest keynote, and the teletext exhibition, so instead I took a wander around the show floor. And while that sounds like I went for a little browse, it took me over 4 hours just to walk the full tour around, and I’m sure I still didn’t see everything. It’s supposed to be ‘Europe’s biggest tech show’, and I get that, it is definitely very big, huge even. Perhaps what’s more surprising is that due to its size it’s not just confined to the pristine stage-managed showfloors for exclusively large brands; walk far enough and you reach twilight regions where the crowds get thin and the products get increasingly obscure.

Most of the booths leading off the front were geared around phone accessories. Wireless chargers, cases, headphones, other miscelaneous stuff. I visited a couple of stalls all promoting cases with varying degrees of protection and on the 3rd or 4th visit I reasoned that they all did basically the same thing and decided to move on without even bothering to write down the names of any of the companies. What did stay with me was the genuinely creative uses of cases to mount phones in different places. Want to mount a phone on your underwater diving suit? Done. Your bike, your belt, your car dashboard? Easy, no problem. What about: all over your body? Well…

An Italian stand sold two iPhone cases which were worth looking at. The first was a a biodegradeable case which breaks down completely after 108 days in compost. It’s a smart idea. The second was a case which changes colour when exposed to UV light. Again, I don’t know why this exists, it’s essentially pointless, but it’s a fun little trick which sets it apart from the endless rows of generic cases.

At the Wacom stall I got to try out last year’s Bamboo stylii. When writing with them on an iPad I definitely felt that the writing was less an accurate reproduction of my movements and more like dragging a ball around on a piece of elastic. For example if you swipe across, the line doesn’t end where you take the stylus off the screen, it carries on for a bit, it’s got momentum to it. It’s probably a software issue, it definitely accentuates the curves in handwriting.

Wacom’s proper tablets were all hooked up to Macs running the latest versions of a whole range of graphics suites, seemingly keen to emphasise how compatible their tablets are with everything. I can’t comment much on that because I didn’t actually get draw anything, and it’s not Wacom’s fault, it’s just that it’s a while since I’ve used one of the Corel programs and they’re not the kind of thing you can just pick up and use. I will say that writing with a stylus directly onto a screen, and using a stylus with an external tablet, are both very different experiences, not least because the tablet still has that ‘ghost area’ where your stylus can still move the mouse around from about a centimetre off the surface. 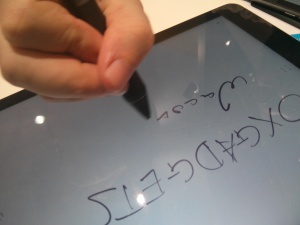 One booth was showing off a glasses-free 3D television. I think it works with a parallax barrier like a massive Nintendo 3DS screen, but that’s just a guess, I’m not an expert. The television seems to work better at fixed angles, when you move around to ‘see’ the 3D effect the transition produces interlacing anomalies on the video and it’s generally nauseating. I’m not sure entirely who makes the screens because their logo was just a generic front company, the people researching the technology are a mix of Italian and Chinese firms and institutes. 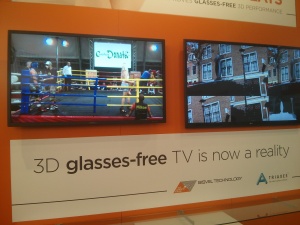 A Taiwanese company called ‘In Win’ had some beautiful PC cases. It’s not every day I get excited about PC cases because for the most part they’re just boxes which work well if they’ve got enough sockets, holes and tabs to hold your computer’s guts with enough airflow to keep it from massively overheating. My first image of an expensive PC case is basically the same as a cheap PC case with a nicer-looking exterior, LEDs everywhere, and some useful extra features. These cases however are bold departures from the standard box design, they’re tough frames made of pipes, with glass panels thick enough to withstand a few knocks. They take the key function of a PC case (to protect the components inside) and they specialise in doing that job very well, and they don’t look terrible either. Plus they’ve got handles for carrying 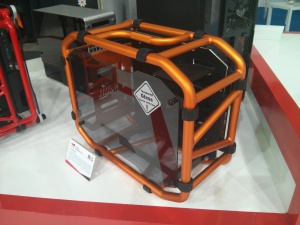 The Acer booth had a Chromebox running ChromeOS. When I put it through the Acid3 test it got a score of 99/100, which is still a fail but it’s also high enough that it can still deal with the standard set of web apps. I’d expect it to run gmail, google docs and angry birds, nobody’s going to try and use it to do anything difficult.

GoPro were pushing some 3D rig, I got quite excited about it until I realised it was just a special housing to stick two cameras side by side. I think they’ve got a bit of a problem with their marketing in that the sort of people who wear action cameras are doing exciting things like snowboarding or surfing or skydiving. That might appeal to dashing young adrenaline junkies, but most of the people visiting the booth looked like middle aged tech journalists who don’t regularly jump off mountains for fun. Nevertheless, people keep buying the cameras so they must be doing something right. 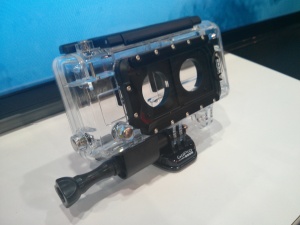 One of the Chinese booths had a glove which has a microphone in the pinkie finger, a speaker in the thumb, and it takes calls from your phone via bluetooth. The gesture people make when they’re trying to mimic a phone call? That’s the gesture which you do when you’re actually taking a call with the special glove. It’s a bit pricey though at $80 apiece. 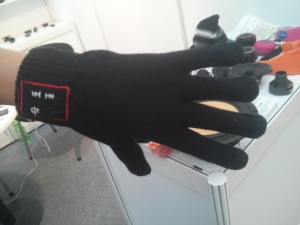 Also in the Chinese section I saw some next generation NGFF SSDs. The guy on the booth was keen to tell me that his company has a partnership with Lenovo (I should have guessed), and that they supplied 11% of all of China’s SSDs. There’s not much to say about this, there they are, ready to be put in your next Lenovo laptop. 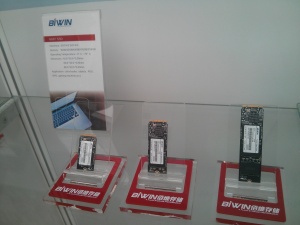 There was a booth which appeared to be selling scented puff-smoke things, and e-cigarettes. I only mention this because they had a ‘Snoop Dogg’ branded vaporizer.

Lastly, I came across a guy touting a virtual reality headset. It’s a bit misleading because it was actually just a housing for a smartphone a few steps more complex than Google’s own DIY cardboard kit. What’s more his promotional brochure was littered with carefully shopped Oculus Rift material. 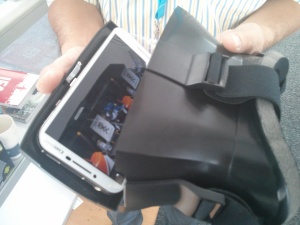 I’m disappointed I didn’t get to try the proper new virtual reality headsets, the line was too long, and the demo was so tightly controlled I doubt I would’ve gotten an authentic experience. A consumer version of the Rift should be ready sometime in 2015, and that’s ok, I can wait till then.