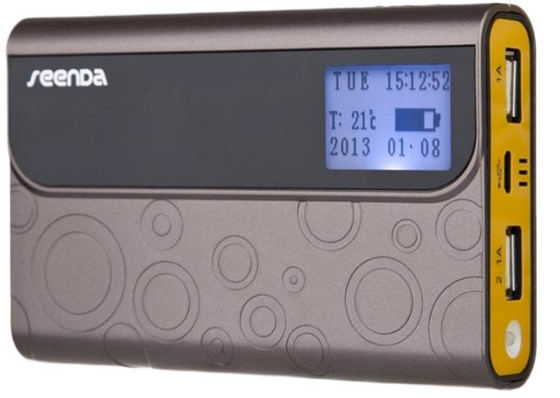 The Chesskin USB Universal Power Bank is the most versatile portable power bank we have tried so far. It features a capacityof 11200 mAh battery, a display that tells you the time, date and temperature, an LED that functions as a torch, and the ability to charge both tablets and smart phones thanks to the 2.1A and 1A USB ports.

The size of a portable hard drive, this is small enough to carry in your pocket. On the top are three buttons that allow you to adjust time/date on initial setup, and then to turn the torch on or off. The right has the charging ports, a micro USB port to charge it and the LED. The front tells you the name Chesskin, and features the LED screen which tells you the time/date and temperature, as well as amount of charge left in the device.

While most of these don’t require a setup, this one does, but only as far as setting the time and date on the device. As straight forward as it gets, and that is it.

The LED screen gives you the following information:

This also makes this different from the usual stuff, and means you can actually carry this around with you, specially if you are camping or out in the wild.

Also featured is an LED torch, though we found this isn’t very bright. However, if you’re left in the dark, it is enough to guide you.

The Power Bank features a capacity of 11,200 mAh. This means that you can charge most smart phones up to 5 times, and the likes of big tablets at least twice. The 2.1A as well as 1A outputs mean you can charge two devices, and a fast charge is allowed on the 2.1A port. It has a cut out point where it will turn off charging at a temperature above 50 degrees C, and we weren’t quite able to test this one.

And obviously, it will charge anything that can be charged via USB.

We have tried a few power banks in the last year, and so far this has been the most functional and versatile one. Moreover it doesn’t cost any more than the competitions, and has more capacity. Definitely recommended.