Before starting this review I’d like to say that I’m not an audiophile and don’t have a great deal of experience with luxury speaker systems. The conditions in which I reviewed these speakers were pretty amateur. Also, Edifier provided us with a set of these speakers for this review.

My closest point of reference is a set of cheap desktop speakers my brother bought for me for my birthday. So what sets the Edifier Spinnaker system apart from the speakers I already have? At £200 they’re significantly more expensive, they look funky, they have bluetooth and optical audio connections, and they might sound better. 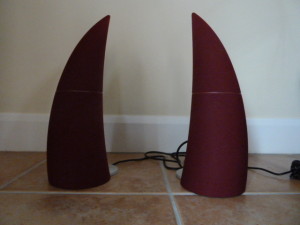 I tested the sound by putting both sets of speakers side by side, connected the Spinnaker speakers to my laptop via bluetooth and connected my other speakers via a 3.5mm audio cable. Then I played a song by Lupe Fiasco.

The backing track comes out much clearer on the desktop speakers, whereas on the Spinnaker speakers it sounds fuzzy, blurry, as if the speakers were submerged underwater. I don’t know if that’s because I’ve gotten used to the tinny desktop speakers or whether this is really how it’s supposed to sound. The Spinnaker speakers definitely have a stronger bass, you can hear the rumbling thump of the drums, boom boom badaboom.

There’s actually an option to outsource the bass function to an external subwoofer, which I tried. Unfortunately my subwoofer is broken so it didn’t work. Still, the option is there for people who want it.

The base of the speakers are quite well made. They’ve got a padded base, which I guess is supposed to absorb the speaker vibration, muffling it from the floor. Also in the base is a cable management system which is fiddly to put in place but once it’s done it keeps everything tidy. 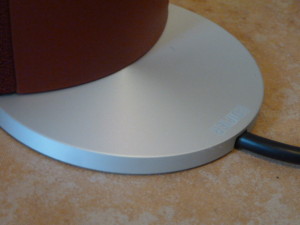 They’re designed to look chic; promotional photos show them blending in next to a television on a wooden stand in a well-lit showroom. In reality they’re standing on the tiled floor of my utilitarian living room, next to a motley collection of some metal chairs, a broken Band Hero drum set, a sleeping bag and the wooden table we use to put the Kinect on. We found the table abandoned in a skip. My point is that they probably do look stylish, but like any decoration they have to be displayed in the correct setting, and in my house they look strange and slightly out of place. 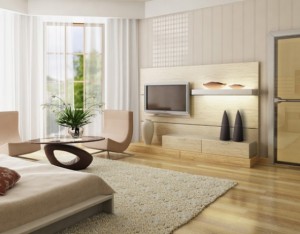 PC Mag thinks they’d make a useful conversation topic, and I can imagine it coming up at snobby dinner parties, ‘golly look at Delilah’s speakers, aren’t they unusual?’ I personally think they look a bit like horns, or really big teeth. According to Edifier the design is inspired by sails, I don’t really see it myself.

The design has other problems too, when I set them up I didn’t check which way they should be facing. For a while they were blasting loud music directly at my next-door neighbours and I was wondering why it was strangely quiet from where I was sitting. Just remember that the tip of the tooth faces away from you, not towards you. I never turned it up to the full volume because after a certain point it got too loud that I wasn’t enjoying the music anymore. 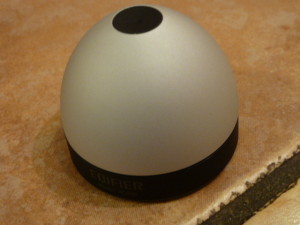 The bluetooth receiver is a metal half-sphere. It’s got a volume control, a red light which fades on and off when it’s charging, and a rubber pad on the bottom to give it some grip. Connecting to it from my phone or laptop is really simple, just select it from the list of bluetooth devices, it takes a few seconds to connect and then it’s ready to start playing. That was a pleasant surprise because I was prepared to spend a good twenty minutes messing with the receiver, instead it was brainlessly straightforward. Click. Connect. Play music.
The receiver battery life seems fine, I charged it for about an hour yesterday and it’s still going today. I don’t think it draws much power when it’s not connected to anything and not playing any music.

The bluetooth connection has a working range of 10 metres, I walked outside with my phone and got around 6 steps away before the connection dropped. It seems about right for 10 metres, and it’s far enough for me anyway. You might be able to increase the range by carrying the bluetooth reciever further away from the speakers. It’s not really a portable thing though, it feels really awkward to hold, as in it’s not very large but it still feels like I can’t properly grasp it in one hand. I recommend just leaving it on any flat surface within arms reach. 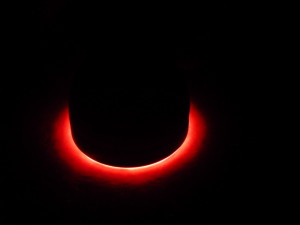 I connected it to my computer with the optical cable and played some music in uncompressed FLAC format. This is the first time I’ve had something which can take an optical input, so that was new for me. I didn’t notice any difference in the sound quality, which was disappointing. One use for it is that the newer Xbox 360 models have optical output as their dedicated audio connection, so it would work with home theatre/gaming setups. I think it’ll be the same with the next generation of game consoles.
There’s an optical cable included in the package, which is very helpful because it means you can set up everything you need out of the box. I really love it when companies do this, see the speakers might be pricey but you get what you pay for, they don’t skimp on the extras.

While I’d consider them far too expensive for myself, a short browse through the world of high-end speakers shows some with prices as high as £500. If you compare against those other speakers in the same category the Edifier Spinnaker ends up looking quite reasonable.

In conclusion, the Spinnakers fall into a weird category of being both a design accessory and a functional device. I have no real complaints about the sound quality, so if you have plenty of disposable income and just want trendy speakers these will do the job well.