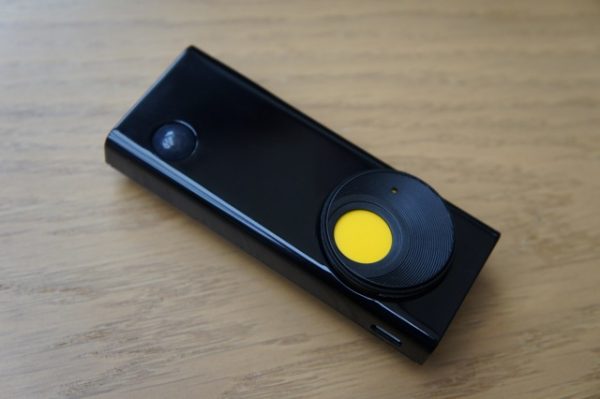 This time next week I will be on the plane, on my way to the start of my trek up Kilimanjaro. I think I am almost there in terms of getting my kit together, we have exceeded our target fundraising goal, and finally my wishlist of gadgets and tech is complete. Back when Kilimanjaro was still just an idea discussed as a possibility I had already started to put together my wish list, and pretty much top of the list was a wearable camera to help document each day, and capture the little moments that weren’t planned and composed into organised photographs and would otherwise be lost.

In January I was thrilled to discover a company in Oxford that was developing a camera that sounded perfect for my needs, and so I contacted them and discussed the possibility of getting a device from them to take with me to Kilimanjaro. The road was not all smooth, and a week or two ago I thought that they wouldn’t be able to get one for me in time. But thanks to an extra special effort by the guys at OMG Life, one popped through my letterbox at the end of last week, which was just in time for me to test it out on my final training walk before the big event. 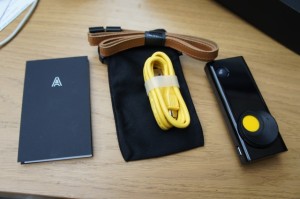 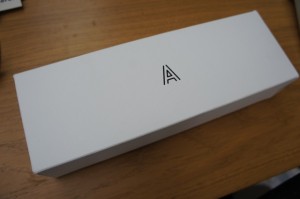 The box that the Autographer comes in is a sleek, minimalist box with just the company logo on the front and a tag line for the device on the back. Inside are the bare essentials – a quick setup guide and brief instructions, a charging cable (standard micro-USB), a high quality soft leather lanyard, a small little material pouch to keep everything in, plus the Autographer itself of course,

The Autographer is a black shiny plastic little box, measuring 9cm x 4cm x 1.5cm (about 3.5″ x 1.5″ x 0.5″ in old money). On the front is a round rotatable lens cover and a light sensor (and a minimalist screen hidden behind the black plastic), and on the back is a clip and metal ring for attaching to the lanyard. Two buttons are situated on one side, whilst the micro-USB port is on the other. It is designed to be small and discreet so you can just clip it on, let it do its thing and just forget about it. Privacy has been considered, and behind the lens cover is a right yellow spot so that people can quickly and easily see when the lens cover is closed, so they know you aren’t taking sneaky snapshots of them!

The build quality is decent, and it looks good enough that you wouldn’t be embarrassed to be seen wearing it clipped to your clothes or hanging around your neck. If I had to find one negative, it would be that I wish they had given the black plastic a matte finish (much like the Withings Activity Tracker we reviewed a few weeks ago) rather than shiny. The matte finish would have given it just that extra feel of luxuriousness – which is what you expect and hope for in a device that costs nearly £400. But that isn’t to say that the shiny finish makes it look tacky – I just personally feel matte would have been better. 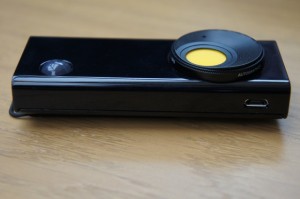 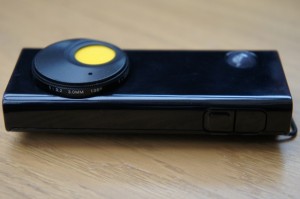 The Autographer manages to pack a lot into such a little device. Rather than simply taking photos every few seconds, the Autographer rather cleverly detects and senses when it might be a good time to take a photo. The Autographer has a custom 136° eye view lens, an ultra small GPS unit and 5 in-built sensors to help it capture great candid shots throughout your day. The sensors are fused by a sophisticated algorithm which tells the camera exactly the right moments to take photos. Clever stuff I hear you say – and I have to agree. And of course, all the data from the sensors is saved as metadata on each of the photo files, so you can see it against all the photos when you review them later on in the desktop software or iPhone app.

The buttons on the side allow you to access some menu functions on the device. There is no screen that allows you to view photos, but  it does allow you to check some settings such as whether GPS is on or off, the level of frequency that photos are taken, bluetooth on/off etc. In addition to settings, one of the buttons does allow you to force the device to start taking a sequence of photos. This is handy if you want to ensure that it will be taking a picture of something in particular, rather than leaving it to chance.

The Autographer comes with software stored directly on it, so when you connect it up to your computer, you can install the desktop software directly from the device. The desktop software lets you view and import pictures from the device. You can also see the metadata captured from each of the sensors alongside each photo. There is also a map view, which shows the GPS position where each photo was taken (where possible). 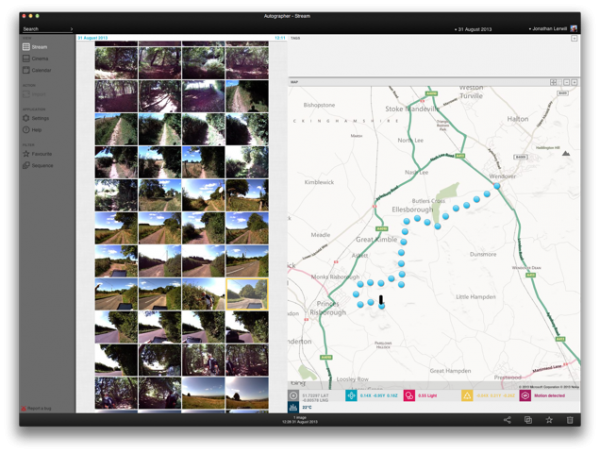 The desktop software also has a function that allows you to select a number of photos and create a GIF or video file using the photos. You can choose the speed at which the photos scroll (choosing an FPS of 1/4, 1/2, 1, 2, 5, 8, 12). The video option also lets you choose a music file to accompany the file as a soundtrack. This video functionality is still very basic, but it is a nice addition to have it built-in rather than having to do the same using different software such as iMovie. But it is rather “rough-and-ready” and I hope that when the software gets updated in the future, they will increase the functionality of this video creation tool.

The desktop software also has easy sharing option (as you would expect), that allows you to share your photos and videos directly to Facebook, Twitter, YouTube and also Autographer’s very own cloud storage service (which is currently still in beta).

The software also lets you organise your photos easily by using tags, and you can also favourite your best photos to allow you to find them more quickly again in the future. 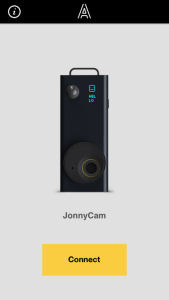 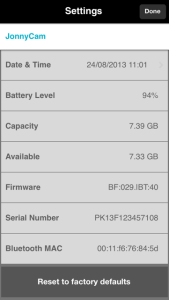 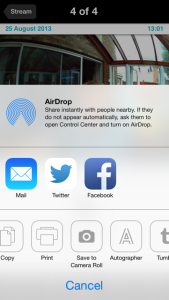 As you would expect, the quality of photos are varied. The nature of the camera is that you wear it, and so it has to deal with a lot of movement, changes in light etc, and so it is not surprising that not every photo will come out a masterpiece. But that is part of the charm of the device for me.  The photos are always natural, unexpected and completely authentic. From candid shots of your friends and surroundings to things you didn’t spot on your travels – Autographer will document it all. On high frequency mode, the Autographer will take roughly 360 photos every hour, so it will undoubtably capture pretty much everything you could possibly want. (On medium frequency it will take about 240 photos per hour and 120 per hour on low frequency). 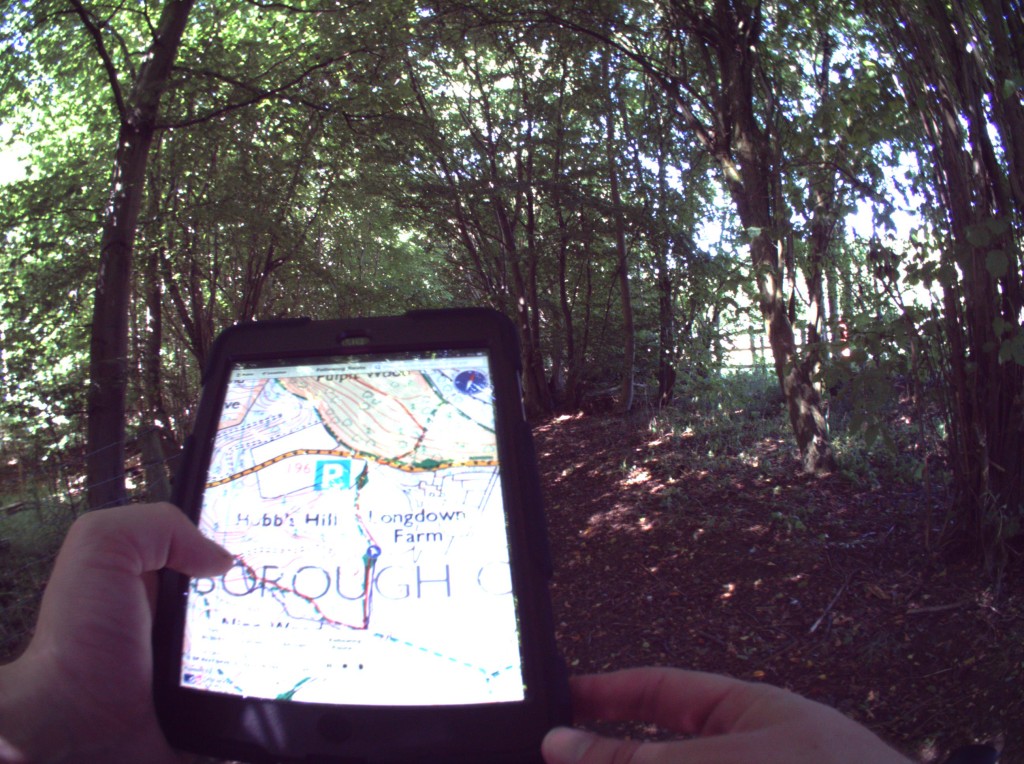 The photo above is an example of the type of shot you can expect to get from the Autographer. The wide angle lens can take some great shots, but it can also take some very strange looking ones too. I have found that photos taken in quite enclosed areas do not come out so well, whereas photos taken outside or in large spaces work very well. But again, the variation, and the slightly “alternative” feel to the shots taken through the wide angle lens add to candid feel of the whole thing.

You can see further examples of photos taken by our review device on our Facebook page (click here to go to the album).

The Autographer is expensive, there’s no doubt about that. At £399, it isn’t something that you would buy off-the-cuff as a bit of a toy. But despite the hefty price-tag, you really do get your money’s worth. I would highly recommend it for anyone who, like me, is planning an expedition or trip somewhere. There probably isn’t much point in getting one if you are simply planning to sit at home with it. But I have to say that I think it is PERFECT for my trip up Kilimanjaro. The GPS tagged photos will let me see exactly where each photo was taken, and I can see the temperature, and I will also be able to upload little videos to Facebook which show a brief snapshot of each day up the mountain (data permitting). But above all, I will love to have each day documented fully so I can look back in years to come and see and be remembered of the little things that I might not have taken a photo of.

To find out more about the Autographer, or to buy one, visit www.autographer.com

To see more photos of the Autographer and screenshots from the desktop software and iPhone app, check out our album on Facebook.

To check out some photos captured by the Autographer, check out our other Facebook album!

One thought on “Hands on: The Autographer wearable camera (The Mountainous Challenge – Part V)”