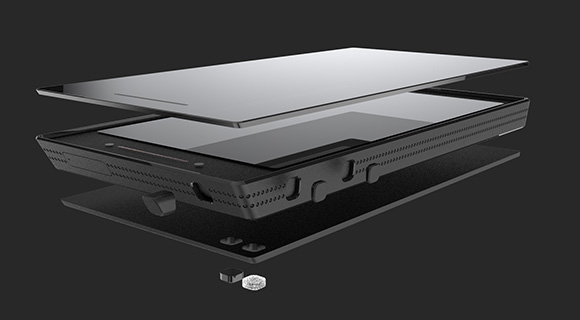 Ubuntu Edge Project  aims to provide convergence to  personal computing : smartphone and desktop PC in one state-of-the-art device. The Ubuntu Edge will dual-boot both the Ubuntu phone OS and Android, and convert into a fully integrated Ubuntu desktop PC. It aims to provide a key-less experience on a smartphone where every functionality is accessible by a mere swipe on any edge. ”Open your favourite apps on the left edge, switch instantly between open apps from the right, and use the system and app toolbars at the top and bottom respectively. It’s so simple, Ubuntu doesn’t need a home button at all.”

You can run full Ubuntu Desktop OS from your phone and  can seamlessly switch between your phone and desktop environment. Motorola tried this a few years ago by using a phone that plugins to a monitor/mouse/keyboard to become a computer but they were  probably ahead of  time, with not enough power to bring a proper OS to people.  You can launch the Ubuntu desktop from within Android using existing Ubuntu for Android app. This integration is fully functional and is explained in the following demo:

And of course the hardware: Ubuntu has paired up with the research labs of the biggest companies and most exciting startups for the realization of the Ubuntu Edge. The technical specifications are:

Specifications are subject to change. Ubuntu Edge might  sound little expensive but as compared to most of the phones out there, it really isn’t. Enjoy the teaser: