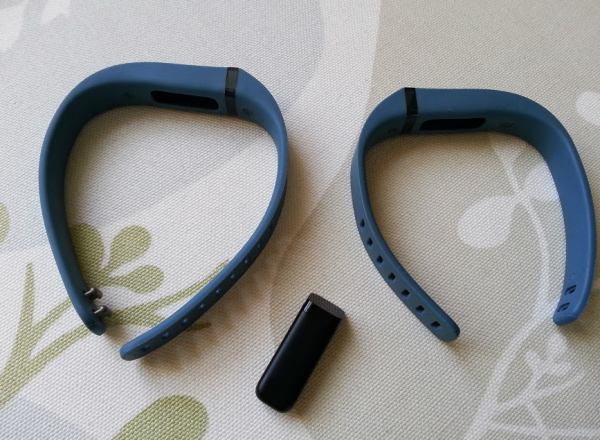 Here is what he had to say:

Well I’ve had my +Fitbit UK Flex for a few days now.  I wanted to upgrade my Ultra to the wristband Flex as I keep forgetting to clip my Ultra to my trousers or shirt, and missing out on steps.  I can’t have that!!

So after a few days use, I have to say I love it!!  I opted for the slate wristband and so popped into John Lewis and handed over my £79.99 .  The band itself has a nice rubberised texture and its feather-light 14 gram weight sits comfortably on the wrist.  You are supposed to wear it on you non-dominant wrist – the one you don’t eat or write with – I tried that for 5 mins and it just felt weird.  So popped it on my dominant wrist – yes I’m a lefty!  Thankfully there’s a setting on the Fitbit website to tell your Flex which wrist you are using.

Set up is so easy.  I just popped my USB dongle into my laptop, downloaded the software from the website (www.fitbit.com/setup) and hey presto, you’re setting up the flex!  I already had an account so it asked me to disconnect my Ultra.  Apparently having two devices is cheating!

Charging up was quick.  I left it a for few hours by which time the five little white LEDs were illuminated telling me that it was time to pop it on my wrist.  Before putting it on your wrist, you just put the tiny Fitbit tracker device into the rubberised Flex wristband.  If you tap it a couple of times the LEDs display your progress so far today.  The downside is there’s no OLED indicator to show how many steps you’ve done, like on the Ultra, Zip or One.  On the positive side that means the battery should last longer.  Fitbit reckons 5 days.

I happen to have a Samsung Galaxy S3, which is a supported Bluetooth 4.0 Android device.  I have to say that syncing in real time is awesome!  Also, one particularly cool feature is NFC.  Just touch the Fitbit Flex with your Galaxy S3 and it launches the android app and syncs seamlessly.  Just brilliant!  It’s great as I often forgot to plug in to sync my Ultra for days on end.  Even better though, is that when you hit your pre-set 10,000 steps target you get a little virbation to tell you  just how great you are!

Talking of vibration, another fantastic feature is the silent alarm.  You can set the alarm from the app or website.  It’s really easy to do from the website, but from the app, slightly more tricky.  On the app you have to go into settings, select your device (I have the aria scales too) and then set up the alarm.  It might make more sense to have a button on the summary page for quick access.  I tried the alarm this morning.  It vibrated at 2:30am – yup, early start for work.  Just a couple of taps stops it vibrating.  Inevitably, I’m pretty sure the vibration for the silent alarm will reduce time between charges but I’ve had it a few days now and not had to charge it yet.

With Flex you’ve still got the sleep mode, to record what little sleep you might be getting.  I read before getting the Flex some people found it difficult to activate sleep mode.  I have to say I found it really easy!  I just kept tapping until you get a vibration from the Flex and the LEDs light up.  Then just do the same when you wake up.  I find this better than the Ultra as it had a button you would press for a few seconds, but the downside would be when you had your skinny jeans on, you might accidentally set sleep mode.  That’s now almost impossible with Flex.

One of my concerns about the Flex being on my wrist was counting steps inaccurately, e.g. if I waved my hands about a bit too much.  So I decided to wear both the Flex and Ultra today to see how they compare.  Up to this point, the Ultra said 7678 steps and the Flex 7887 steps.  Not much difference, which could be accounted for the fact I can leave my flex on while getting changed or in the shower.

The Flex is waterproof and I did try it in the shower.  It survived, thankfully!!  The only niggle I had was that some water must have snuck in to where the Fitbit tracker sits inside the band because it made a bit of a squelching sound.  I guess maybe I don’t have the wristband on tight enough.  So for me, I think I’ll just take it off while in the shower.

Overall, it’s a really great new addition to the Fitbit line-up. For me, having it on my wrist is much more practical, so I’m less likely to lose it!!  Then if you’re lucky enough to have a supported device the live syncing is a superb addition!   Head over to to www.fitbit.com/uk/flex for more details.

You can see his complete review, as well as his photo album at the following link: