Portable media players – Obsolete or just in need of a makeover?

At this point, you may be thinking, “Why did he call it a ‘portable media player’ in the title, rather than an MP3 player?” However, there’s a good reason behind that. A lesser-known file format, called FLAC (Free Lossless Audio Codec) is used by numerous audiophiles – As its name suggests, it’s lossless. That is to say, the quality of the recorded track is much higher.

With technology advances and increases in mobile internet (4G) speeds, more and more people are leaving behind their iPods and simply streaming music from their computer directly to their phones. After all, why wouldn’t you? It allows for a more diverse, larger library, it’s easy enough for anyone to do, and it saves you from having to carry around yet another device.

However, some of us (shockingly), don’t own state-of-the-art phones capable of this – As a BlackBerry user, I feel somewhat out of the loop with the latest apps such as Candy Crush and Temple Run, but I digress. My Curve 9320 isn’t capable of streaming music from my desktop, and, as an avid musician, I’m struggling to find a lightweight portable music player which supports FLAC. As with all lossless media formats, songs in FLAC format take up a lot of space, which brings me on to another requirement for the portable media player – A large storage capacity. 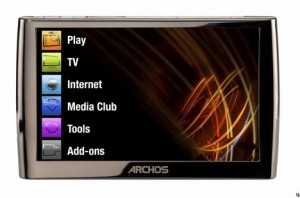 After extensive research, I’ve been unable to find a device with a modestly sized hard drive – I’d have to make a compromise of either sound quality (By switching to MP3s) or storage quantity. The largest current capacity for a media player comes with the Archos 5, which has no support for FLAC files and meagre 250gb of storage space – Not nearly enough for someone whose music library totals almost twenty thousand songs. It also seems that there are very few media players capable of opening FLAC files without heavy modification, and even the ones which exist have less-than-desirable storage capacities – The Sansa clip being a perfect example.

There’s essentially a gap in the market here – There’s nothing out there that allows me to store a large music library without sacrificing the quality of my songs. As a software programmer, I’m looking into starting a project to create a revolutionary portable media player – One capable of playing FLAC and storing large amounts of music.

If successful, this new device could potentially revolutionise the portable media player industry. I’ve been thinking about the components I’d need to create it. As a base, a single-board computer (in a protective case) such as a Raspberry Pi or a small model Arduino would be needed. For storage, I’m currently considering two options – SD Cards (Not to be confused with a SSD, which wouldn’t make for comfortable portability!), or flash drives (USB sticks). Currently, the largest commercially available storage amount for both of these storage means hovers at around 256gb, with non-commercial capabilities of 1tb (1024gb).

The board would run on a Linux distro, most likely something lightweight such as PiBang or Raspbian if it were running on a Raspberry Pi. This operating system would be booted from a smaller, most likely 1gb SD card or flash drive. Alongside this smaller storage media would be multiple other storage mechanisms. Size-wise, SD cards seem more viable, although it’s more than possible to strip a flash drive down to just a circuit board and use that as a storage mechanism, which is most likely what I’d use.

If we wanted to go into the deeper technical specifications, I wouldn’t be able to tell you much as of yet, as I’ve not really considered the libraries I’d use to make the board boot directly into a music player. The final component I’ve thought about is the output – As with most media players, sound would be outputted via a standard 3.5mm female-to-male jack.

I’d like to hear your opinion on this – Do you think that portable media players are dead now, due to increasing functionality of phones, or is the industry just in need of a hardware breakthrough?

5 thoughts on “Portable media players – Obsolete or just in need of a makeover?”