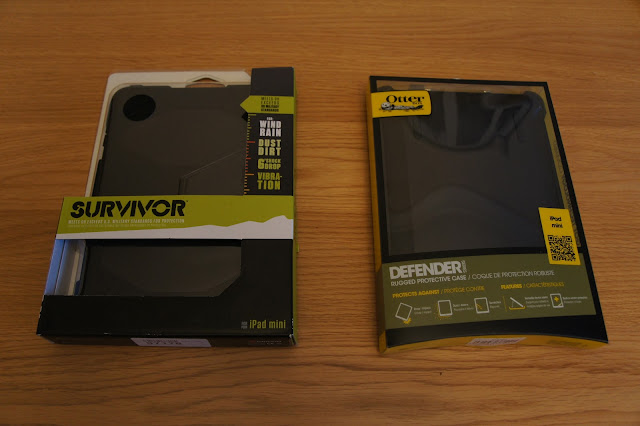 I am hoping to be able to blog during my trip up Mount Kilimanjaro, and keep friends and family updated via Facebook. I have decided that my iPad mini will be the best thing to use for this for a number of reasons (which I may go into in another post). This has led me to concerns about how to keep my iPad mini safe during a trek that will see me carrying it over rugged terrain, experiencing temperatures of anywhere between both +30° and -30°, and environments ranging from rainforest to frozen rocky landscapes.
A bit of research allowed me to narrow the options for rugged iPad mini cases down to two: The Otterbox Defender and the Griffin Survivor. These two names kept cropping up in my searches, and it was clear that I should be using one of them – but I couldn’t find anywhere that had a really decent comparison review of them both. So I decided it would be a good idea to do a comparison review on oxGadgets. The kind folks at Mobilefun.co.uk sent us both cases, and over the last few weeks I have been testing both out.
The Otterbox Defender 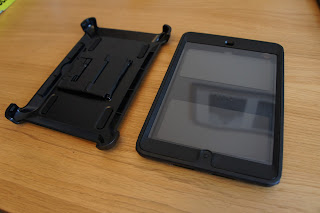 The Otterbox provides three layers of protection – first is a thin plastic cover which your iPad sits in. The thin plastic back clips together with a screen-protecting front cover. The front cover has a thin sheet of transparent plastic to protect your device’s screen from scratches. The second layer is a silicone back that wraps around the back and sides, outside the first layer plastic. This silicone layer protects the device from drops and impacts, and also against dust, debris, and some moisture. The final layer is a thick protective plastic outer cover that can be clipped over the front or back. This outer cover also has a built-in versatile stand than can be used to prop the device up in any number of configurations (i.e. portrait, landscape, upright for watching movies, or at a shallow angle for typing): 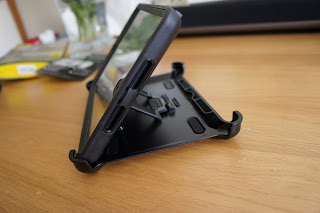 Holes and ports are provided in the usual places to allow the camera to be used or to allow access to the switches/sockets. Some holes, for example for the camera lens and the holes near the speakers to allow the sound out, are not provided with any cover, and so the case is not very waterproof. I would be fairly comfortable using it outside in the rain, but would be a bit more concerned if I dropped it in a puddle.

Otterbox’s Defender range includes cases to cover not only the iPad mini, but many other devices such as the iPhone and iPad, Samsung Galaxy devices, Blackberry, HTC and Nokia phones, Kindle Fire etc. Some are also available in different colours (black, pink or grey for the iPad mini). Click here to see the Otterbox Defender range on mobilefun.co.uk.
The Griffin Survivor 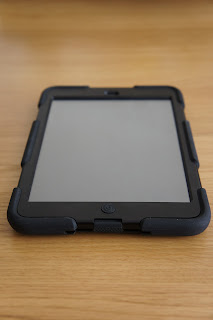 The Griffin Survivor comprises a polycarbonate back shell which the iPad mini sits it, then silicone cladding is wrapped around the back of the back shell, and wraps around the sides and the front onto the front glass of the iPad mini. The silicone cladding has an internal honeycombed structure, which provides even greater protection against knocks and other impacts. Finally a protective plastic front cover with screen protecting window snaps on the front.

All the holes and ports in the case are sealable, meaning this case provides a decent level of waterproofing against driving rain. Even the camera lens is covered by a silicone hatch that can be swivelled back when you want to use the camera. I would feel confident that this case would provide a decent amount of protection against the elements, and although Griffin do not claim this I would feel confident that it could protect the device if it was accidentally dropped into a puddle briefly.

The Survivor is provided with a rudimentary stand that can stay attached without getting in the way too much. Although this stand only allows for the iPad to be propped up in a landscape orientation, but can do two different angles in the same way as the Defender.
Griffin’s Survivor range is also available for iPhone and regular iPad. They also do a fully waterproof iPhone 5 case. Click here to see the Griffin Survivor range on mobilefun.co.uk.
The Comparison
Firstly, I should say that both cases provide a high level of rugged protection, and it is hard to really distinguish between the two. I suspect in most cases it would come down to very specific individual requirements and preference. Having said that, each case has their strong points and weak points. For example, the Defender’s silicone cladding is uniform thickness whereas the Survivor’s has the honeycombed interior, which gives the impression that the Survivor would fair better against drops and other impacts. On the other hand, the Survivor does not give great protection for the screen with only thin plastic scratch-guard, compared to the almost indestructible thick plastic outer-shell of the Defender.
The stand that is built in to the hard shell of the Defender is much better than the little add-on stand that comes with the Survivor, allowing for the iPad to be displayed in both portrait and landscape.
In terms of weight, the Survivor is roughly 100 grams lighter than the Defender (according to my kitchen scales), but this is likely due to the Defender’s extra protective cover.
Price-wise, the Otterbox Defender (RRP £54.95) is ever so slightly dearer than the Griffin Survivor (RRP £49.95). However, at the time of writing both products were on offer on mobilefun.co.uk, with the Defender at £49.99 and the Survivor at £39.99. 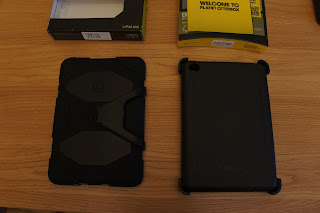 My verdict
I did struggle to choose between the two.  In the end, for the purposes of my trip, I think I have decided to go for the Griffin Survivor. This is mainly due to it being lighter and also because it seems to provide slightly better waterproofing. The Defender nearly won due to the extremely high level of protection that the hard outer shell gives the screen, but it was just piped at the post. One slight niggle I found with the Defender was that the home button was harder to press compared to the Survivor – just a very small niggle, but the fact that it played a part in helping me decide shows how close it was between the two!
I do have some weekends away for training, so I will take both cases away with me on those to give them some more thorough testing out in the field. I will let you know if I change my mind!
Whichever one I decide one will end up joining me at the summit of Mount Kilimanjaro, and the other we will be giving away in a competition in the future, so keep your eyes peeled for that.
Both of these rugged cases are available from www.mobilefun.co.uk at the following links:
Griffin Survivor (for iPad mini) | Otterbox Defender (for iPad mini)
View more photos of both cases on our Facebook page:
Griffin Survivor photo album | Otterbox Defender photo album