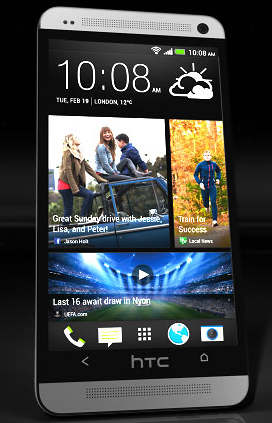 The ONE!
The moment you take the cover off the box and open it, prepare to be awed. This phone looks good. Really good. Say what you will, and compare it to whatever you want, this is pretty much one of the best looking handsets ever produced. Finished with a beautiful aluminium body, immaculate curves and brushed finish, this phone is definitely a beautiful device. The curved back means it fits beautifully in your hand and boy do you love it when it is in your hand.

The looks:
The looks are what this is all about. Actually, there is a lot more to this, but the looks are a good place to start. A beautiful silver finish brushed shiny curvy thing that fits like an egg in your hand.

The front of the phone shows off the 4.7” screen, which is brilliant by the way. Below the screen are the two buttons for Home and Back, going away from the traditional 3 button Android approach. On both sides are speaker vents, which hide behind them the power of BoomSound. You also have a camera and proximity sensor packed in.

At the bottom is a small hole for mic and your micro-usb connector for charging as well as communication.

The left is where you pop your micro-sim in.

The right has beautifully finished Aluminium buttons that allow you volume control.

The top has a 3.5mm port as well as a power button which hides behind it the IR sensor/transmitter. 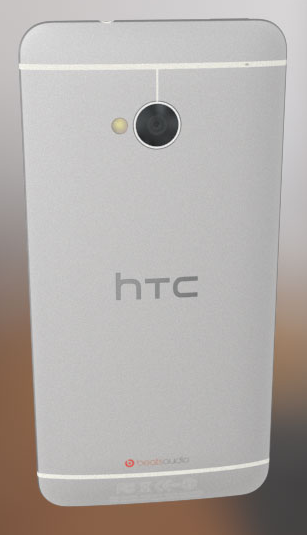 The back is beautifully curved and shows more of the metal finish that makes this so good to look at. It also features the camera, the flash, and the HTC logo as well as the BeatsAudio logo.

It is beautiful. It truly is. Did I mention it was beautiful?

Hold the power button down, and this phone pops to life. Showing off the HTC logo, it takes you to your setup screen, where you can enter various account details, and it also urges you to create an HTC account if you haven’t made one yet.

After releasing Sense 4.0+ with HTC ONE X, HTC have unveiled Sense 5.0. While in the past this was almost a necessity for HTC phones, as they used to run primitive Windows software, Android has come a long way since then, and it probably doesn’t need any skin on top of it at all. In fact, this goes to Samsung as well, but we’ll talk about them in a different post.

The font and looks are different, and for the better. The screen gives you a sharper resolution and nicer feel, so a definite win there.

However, things have moved around and changed. The Apps Tray can just stay on even if you hit Home while at it. It also lays out apps in a 3×3, and you scroll up and down instead of left to right, which means it isn’t quite the same. Takes a little getting used to. It does allow you to have folders in your Apps screen, which is a handy feature. 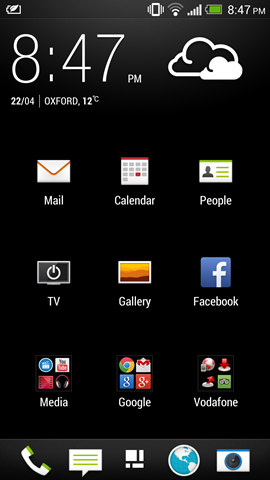 T
here is no Recent Apps button, hence that does not exist in Sense 5.0

The Lock Screen does offer information, but what we really like is the option where you can actually disable the Lock Screen and wake up straight on Home Screen. This may seem like a step back but it is actually a step forward. 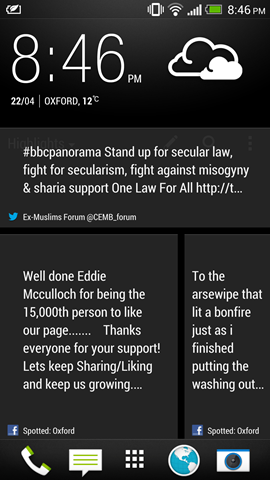 You are then taken to desktop where you see a very white on black look for the Blinkfeed page. Swipe right and you get other screens. By default Blinkfeed is your homepage, though you can change it to be one of the other pages.

Blinkfeed itself is HTC’s solution to keeping you up to date about everything that goes on. This includes updates such as Twitter and Facebook, your calendar events, your favourite program coming on TV, and other notifications. You can tweak these to show different information as  you like, but personally we didn’t think this is the future. Probably one of the things that you need to let grow on you a bit. Sadly, there doesn’t seem to be a way to disable or get rid of this! 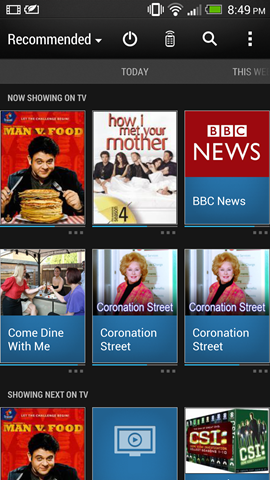 One of the coolest features on the HTC ONE is the TV app, which pairs with IR sensor on top. This essentially acts as a remote control, and you can program it for various profiles, such as your living room, your bedroom, etc, to cater for the different hardware you have. You can also tell it what programs you like, whether you have a Sky Box or a Virgin Media Box, and what other media players you own.

Once setup, it is remarkably simple. Your favourite programs will often appear in your Blinkfeed, but even if they don’t click the app and it will take you to a list of what is on TV, and what is about to be on next. Click on a program and as if by magic, your TV will switch to that. You can set reminders, and do other features with this too.

Only a matter of time before other products appear that run on this kind of technology.

Camera
HTC have been very brave with this phone. They knew it all relied on this one, and they went for the unconventional route of going back in the pixel count by working on a new technology called UltraPixel. Packing only 4MP as compared to most other phone cameras that are going beyond 13MP now, this hasn’t been a bad move.

The pictures are awesome, and the results are brilliant. Specially the performance of the phone camera in dark has been great, both with or without the flash. The camera also packs in some filters, much like most cameras, but they are fun.

Click to enlarge pictures!
HTC Zoe
This has been the year of innovation for cameras. HTC have given us the Zoe, which captures a 3 second video and up to 20 pictures of what you are looking at. Choose the best one, and keep the video as a highlight. A novel concept, but it works. I have taken many Zoes, if that is the right word, and the ability to look at your pictures later in more detail helps. Great to capture those sport events!

Boomsound
Notice those speaker grills on the front of the phone? Well they mean business. Away from the usual ‘back’ speakers,these speakers are not only facing you, they deliver you great quality sound. Yes, they will not replace your hifi or those massive speakers you own, or something like the Jabra Solemate. However, they will give you an extremely amazing speaker that fits in your pocket and travels with you everywhere. Two speakers give you full stereo experience with surround sound built in. Don’t worry about the sound being tinny either, as these speakers do not sacrifice anything. Sharp, clear, and correct voice, bass and treble quality give you something that has been missing from phone speakers up till now!

Other
Great hardware, a decent battery life, ability to play with all apps designed for this version of Android. Lacks 4.2.2 unlike the main competitor, but this should be rectified soon.

Conclusion
A beautiful phone, amazingly fast and responsive (without going into specs), awesome camera, and works great as both a communication device for talking/texting as well as a smart phone. A high score understandably from us.
Over the next few days we will go into more detail in some of the features, and review them.

I like this… where do I get it?
You get the HTC ONE from Vodafone at the following link:
http://www.vodafone.co.uk/htc/
We, of course, thank Vodafone for sending us this review sample of HTC ONE.