I got an interesting email the other day from a Pakistani company called JugnooMedia. In a world full of apps, somehow the slice for little kids and toddlers is still void of many popular ones. They have come up with an app which focuses on local Urdu (and Hindi) nursery rhymes and provides an interactive experience for kids. It has been released for iPhones and iPads, and is coming soon to Android.

I have asked a few of our readers and friends to try the app out, since we do not have an iPhone to play with at the moment, and we’ll update you on the feedback as we get it.

Following is the complete media release:

Lahore, Pakistan – February 26, 2013 – JugnooMedia has released a mobile app titled “Duddoo Aur Dhobi” for toddlers and children 1-3 year old. Aimed at providing fun content for Indian and Pakistani children, the app is based on two popular Urdu nursery rhymes “O Baba duddoo’a” and “Dhobi aaya”. It is a ‘digital toy’, which provides a highly interactive and immersive environment for children. The app has lyrics and characters based on South Asian themes, heroes, stories, traditions and context. Since Pakistan and India share a common history, culture and spoken language, it would be apt to sub-title JugnooMedia’s effort – “Apps without borders”.

Duddoo Aur Dhobi is initially being released for FREE on Apple’s iPad and iPhone platform but will also be available on the Android platform very soon.

It can be downloaded from the following links: 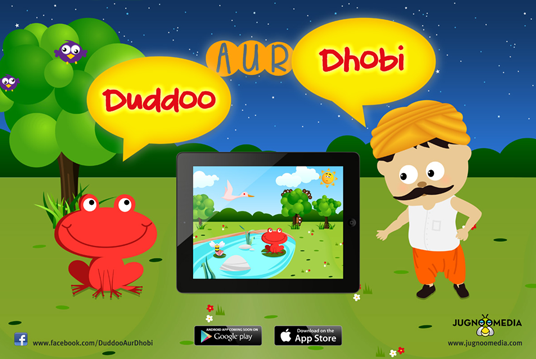 Jugnoo means ‘Firefly’ in Urdu, Hindi and other regional languages of South Asia. The venture is named JugnooMedia because the founders were simply enthralled by the vast presence of this small insect while growing up. In old days, it was the norm for young children to run after these beautiful insects and attempt to catch them. Other children would catch a bunch of jugnoos and put them in glass bottles to make lanterns. In today’s day and age, this beautiful and fragile insect is under severe threat. As cities become large, paved and cemented with less and less natural habitat, the jugnoo has virtually disappeared from large cities of South Asia. Local culture, heritage and languages are on the defensive; being squeezed by the massive global culture which emphasizes cultural homogeneity at the expense of cultural diversity. It tends to be more material than spiritual and is devoid of local context. JugnooMedia wants to change that. Its first project is to build immersive digital toys in local languages that are based on popular nursery rhymes of the region.