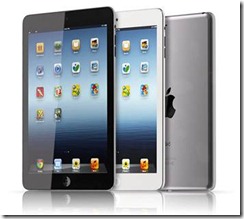 According to rumours the iPad mini is about to be launched in the market in some days and the hype is same as that for the iPhone 5 when it was about to be released last month. The company has said that the devices from Apple now are going to be unique and different. The users had previously complained that they always experienced repeated features in the Apple gadgets. With the iOS 6, however, the company states that the features will be a lot better and new as if out of the box.

There have certainly been many more rumours about the iPad mini as it is about to enter the gadget market and the competitors are all on the verge of fear. The iPad mini is said to be sleeker, more reliable in features, and has removed the complaints of the users, with new apps and software updates. For such a delicate 7 inches device, you would want to have a theft cover with insurance or some accessories like cases/covers.

The features the grapevine has for us are as follows for the iPad mini:

1) The Office suite will be available on the iPad mini in full form. Previously you could only use the basic form of MS-Word. However, now you can sue the full version of every MS-Office application on the iPad mini.

2) The iPad mini is said to have only the Wi-Fi technology. The LTE 4G is not included. The company is rumoured to have the iPad 3 launch with revised specs and the LTE 4G technology instead of having it present in the iPad mini.

3) The device will have its own check in apps and the geographically locating apps for you to decide on a location then search it and visit it. There are no Google maps, but Apple has had the apps for maps already in iPhone 5 and this will be present in the iPad mini as well.

4) The 7 inches tablet is said to compete with Google Nexus and the Kindle Fire 2 and 3. Previously the users complained that the iPad 2 and 3 were bigger enough not to be carried to places easily. The company solved the issue by launching a 7 inches tablet and a Bluetooth keyboard full on QWERTY features, so you could enjoy the experience as you would on a small sized, smart, laptop.

5) The iPad mini will also have a series of new accessories coming out by Apple, and the third party dealers contracting with Apple. The cases/covers/skins etc., will be much more in variety and the quality will be unique.

6) The iPad mini’s front facing camera is almost as good as its back-facing camera. The light sensitivity has been retouched so that you get the same results with the iPad’s both cameras.

7) The touch screen is anti-glare and the Retina Display is a surprise for all users. The teardown videos of the supposed iPad mini reveal the display from Samsung as it has been confirmed in the iPhone 5 as well.

Muhammad Azam is a technology and gadget enthusiast who has previously written for some highly respectable companies such as Protect your bubble insurance who are one of UK’s leading mobile phone insurance and theft cover provider.

2 thoughts on “Top Rumoured Features of the iPad Mini”