So about two years ago, Sharpie announced the Liquid Pencil (http://blog.sharpie.com/2010/08/introducing-the-new-sharpie-liquid-pencil/). Every since that announcement, I have been waiting for it to be released in the UK. Two years go by, and still nothing.

However, the other day, browsing through Staples (in the UK), I came across the Staples Liquid Pencil. Compared to the Sharpie ones (0.5mm), these are 0.8mm, and hence a bit thicker. However, I had to buy and try them, being a geek and what not.

They come in packs of three and while I do not remember the exact price, I remember it to be cheap enough for me not to worry about pricing. Of course they were more costly than a regular pencil, but definitely cheaper than most mechanical pencils.

I also compared it to a Staedtler 0.5mm Mechanical pencil, which I just happen to have.

The look and the feel is fairly reasonable. The grip is okay. Nothing special. Much like a regular ballpoint pen. 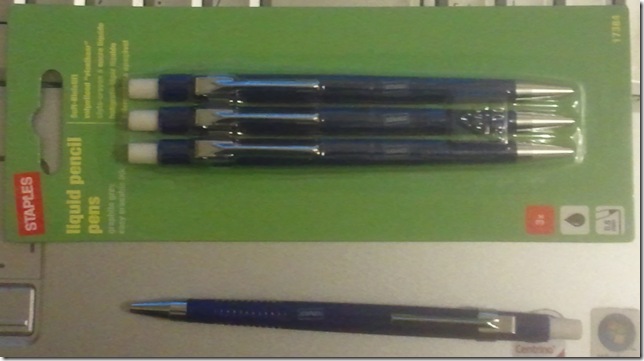 And that is where the main problem lies. I find it a bit too much like a ball point pencil.

Yes, IT CAN BE ERASED using a rubber/eraser, but even then I found it lacking.

Here are a few tests I did. First some lines, going from darker to lighter.

Next I tried a bit of text, and some squiggles. The liquid text is below, and if you care to click on the image, you will find that once again, it is too much like that of a ballpoint pen.

Overall, I think it is a very interesting technology, but work is required. I can understand that graphite is a lot harder to manage in the liquid form than other inks. However, the fact that the result is 0.8mm thick needs some work. Also, perhaps increasing the comfort on the pen(cil?) may help.

I would, however, suggest, everyone who still loves to use pencils, to give them a go, as they are a lot easier with no leads or sharpening required.