Now while today was the day CERN gave a much anticipated statement about their progress with the discovery of Higgs Boson, this video of two MIT dudes showing speed of light videoed excites me a lot more. 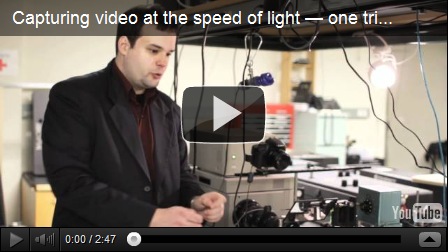 Here are a couple of other links in case the video does not work:

Now while the explanations, and the physics seems to make sense, the whole idea of a video that shows light travelling is mind boggling in itself.

See, a video itself shows light bouncing off of different objects, captured frame by frame by a camera, and shown to us which we see with our eyes. Our eyes work in the same principle, where the light bouncing off of different objects forms images in our head. If we were to actually see light travelling itself, then the whole idea light reflecting off of objects and forming images in our head tends to … well… confuse me at least.

But, having said that, it is an exciting prospect.

Here is to more physics!