I say simplified. It may not be the case for every one.

But I have just attended a lecture by  Dr Tony Lewis or the Duckworth/Lewis Method, and through his graphs and curves, he has attempted to explain why, what, and how of the method seems to confuse players, commentators, and spectators alike.

He begins by giving a few examples, where justice had surely been thrown out of the window when rain or other factors forced shortening or abandoning of a cricket match. The most famous example being South Africa v England, semi-final 1992 World Cup, where a factor of 22 off 13 balls was reduced to 22 off 1 ball there.

Various methods have been used in the past:

Chasing a score, the team batting second has two things to look at: the overs/balls remaining, and the number of wickets in hand. A method was required that used both these factors, unlike the previous methods that only used the first factor.

Frank Duckworth, came up with a method that used both the factors. Sadly, the method was very complex and required at least a computer or a telephone sized directory to calculate. Being 1995, this was not the easiest way to go. However, Tony Lewis collaborated and worked with Duckworth and managed to make it much simpler.

Following table and chart give an example… 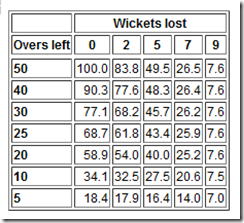 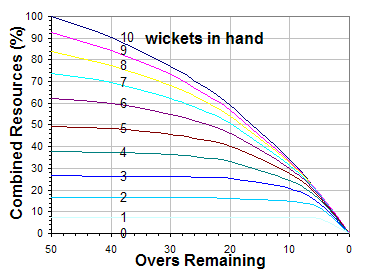 Interesting factors that are used in the calculation are the average ODI score over the last 4 years, which has gone from 235 to 245 in a decade.

Another interesting point was that based on numbers and stats, this rule applies perfectly to T20 cricket as well. It does not feel right, and the Eng v WI match for the T20 Championship in West Indies this year was a good example. Chasing 60 off 6 overs seems a bit too easy if you made 191 in 20. Having said that, Sir Lewis stands by his grounds, and showed graphs to prove his words.

I found the following links useful: